View source
watch 02:34
Fire Emblem Warriors: Three Hopes - The Loop
Do you like this video?
Play Sound
For the stripper, see Cheetah (stripper).

supercar_3_eur_v8 (GTA V)
“Forget the last 50 years of technological advancement and hark back to the golden age of driving before seatbelts, DUI laws, anti-lock brakes and emasculating GPS systems with nagging female voices. A prototype sports car manufactured by Grotti in the early 1970s, this marvel of Italian engineering will over-compensate for just about anything. Just like the Italians.”
— Legendary Motorsport description.

The Cheetah is a supercar featured in both the 3D Universe and HD Universe. It is manufactured by Grotti in the HD Universe.

In all its iterations the vehicle closely resembles a 1984-1996 Ferrari Testarossa, with each game's version following the design of the corresponding era:

Looking at the shape of the car, it appears to be a rear/mid-rear engined vehicle. However, when the hood is removed, in Grand Theft Auto III and Grand Theft Auto: Vice City, the engine appears to be at the front, possibly due to programming limitations. This is in stark contrast to the design of the Testarossa in general, which has the engine placed behind the passenger compartment, just in front of the rear axle (mid-engine). However, in GTA San Andreas, the design is more faithful to the real-life counterpart, with the engine being evidently placed at the rear of the chassis, while the front is empty.

The Ferrari Testarossa began sales in 1984 (The year in which Vice City Stories is set). The first "red head" didn't sell enough until late 1985, and therefore, for the sake of having no irregularities about the comparison of the two cars, the developers of the game made the Cheetah scarce in Vice City Stories, spawning only in parking lots.

The Cheetah is reintroduced in Grand Theft Auto V and Grand Theft Auto Online. Unlike in previous games, the Cheetah has drastically changed to a very modern supercar based on the Ferrari Enzo, with elements of the Enzo, Ferrari FXX, the Pagani Zonda and the SSC Tuatara on the front bumper. The rear overhang is similar to that on the GTA Spano. The carbon fibre stripe on the bonnet resembles that of the Pagani Zonda Tricolore. The Cheetah is stated to be a 1970s prototype put out by Grotti for limited production.

The Cheetah is distinguished by its angled front, which is dominated by the two intakes on either side and a third smaller one on the center. Below the intakes there is a small carbon fibre stripe running across the front area up to the front wheel arches. On the upper side, the car possess a carbon fibre stripe which is narrow on the front end and becomes wider towards the greenhouse area.

The sides are dominated by the bulky arches that house the headlamps on the front and vents on the rear. The headlamps have a black trim around them and small vents are seen between these lamps and the carbon fibre stripe, intended for the airflow coming from the front intakes. Over the front portion of the stripe there is the Grotti logo. On the greenhouse area, the bottom side swepts slightly upwards onto the rear wheel arches, featuring carbon fibre skirts with a vented detail on the rear portion. The aforementioned front vents have "Grotti Automobile" marked on the lower side and the rear vents are smaller in appearance, which are angled towards the front and parallel to the skirt vent and the cabin rear pillars. The cabin itself features carbon fibre pillars, rear-view mirror wings and roof panel, with a single curved windshield wiper.

Onto the rear section, the bottom side keeps the curved lines from the center, housing a carbon-fibre diffuser with room for the twin exhaust pipes on the center. On the upper side, the car houses the tail lights on either side and the rear vent, with "CHEETAH" marked above it. Starting from the same cabin area, the car features a vented window surrounded by more carbon-fibre details and a distinctive formation for the rear spoiler. This rear section also serves as a rear clamp for the engine itself, which swings upwards from the cabin and hinges from the cabin, leaving only the carbon-fibre bottom as the bare structure. The engine appears to be supported by black bars around it. On the underside, the Cheetah uses a large carbon-fibre plate, leaving only the suspension and the gearbox exposed, along with the aforementioned rear diffuser.

The primary colour of the car is applied on the bodywork, while the secondary is applied to the interior stitching. It uses a set of wheels similar to the "Cheetah RR" high-end rims available at Los Santos Customs, but lacks the bolt details around the center of the rim.

The Cheetah's acceleration is slightly inferior to other sports cars in the game, but handling, speed and braking are far superior to all others. Due to its low suspension, it hugs the road and is not prone to rolling over or spinning out of control when cornering at high speeds. However, GTA III's Cheetah has stiffer suspensions than those of the Banshee, Stinger and Infernus, making it incapable of handling bumps and curbs without compromising stability. For most of the 3D Universe it was the fastest car, but its top speed is slightly lower in GTA San Andreas. It is powered by a V8 engine in all of its appearances.

The Cheetah is one of the best performing original supercars in GTA V, being able to compete with the Adder, the Entity XF, the Turismo R and the Zentorno. Having a great speed and acceleration makes it useful for most situations, like robberies and police chases, and like its previous 3D universe rendition it also has extremely responsive handling and braking, making it much more agile than other super cars in the game. This makes it particularly useful in Online urban races where, in the hands of a considerably skilled driver, can easily turn through a street corner without having to decelerate much. The car tends to wheelspin when setting off, significantly more than other supercars.

If the suspension is lowered to the maximum through Los Santos Customs, the Cheetah is able to drive right under high-suspension vehicles, such as the Sandking XL, at high speed and sometimes some low-suspension vehicles if driving head-on against them. This can also be done with the Turismo R.

The engine model appears to be a single-overhead camshaft V8, evidently by the exhaust manifolds seen when the rear hood is removed. The car features intercoolers located directly after the side-intakes, suggesting the car is turbocharged. The exact same engine model is found in several other, similar-tier supercars, like the Turismo R, Osiris, T20, Reaper, and FMJ. The website also claims it sports a 6-liter engine.

In the enhanced version, the speedometer only reads up to 200 mph, despite claiming it can reach up to 221 mph.

The Cheetah can be modified at TransFender:

The "Rocket", an early iteration of the Cheetah in GTA III. 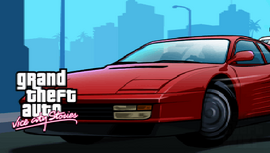 Artwork of the Cheetah in GTA Vice City Stories.

A prerelease screenshot of the Cheetah.

Official screenshot of the Cheetah. Note the different Grotti logo from Grand Theft Auto IV on the front and the glass roof.

The blue Cheetah prop in the Trailer from Pack Man, featuring the glass roof from the beta model. (Rear quarter view)

The Cheetah on the Rockstar Games Social Club. 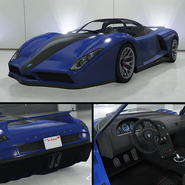 The Cheetah on Legendary Motorsport.

The Cheetah on the updated Rockstar Games Social Club.

The Cheetah in the Cinematic preview on Rockstar Games Social Club. 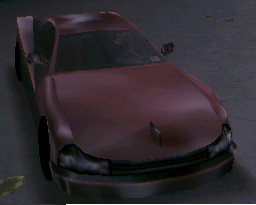 The unique Cheetah, as seen during Grand Theft Auto.

In the Grand Theft Auto: Liberty City Stories race Wi-Cheetah Run, the player has to race against three Cheetahs, two of which have special colors (brilliant red and sky blue), fireproofing and also tip-proofing. They can be obtained by remaining in the starting line until the end of the race and waiting for the other racers to cross the finish line. Then it has to be blown up using the player's car and pushed with the firetruck or the tank into one of the safehouses' garages. Oddly, if the player touches its wheels while performing the glitch, the vehicle will loose its unique traits.

3 heavily modified variants of the Cheetah may appear in Vehicle Cargo source missions. Each variant has a unique license plate number, colour combination and different set of bodywork modifications.