Prepare for Checkpoints in the [Location]. [?]

No checkpoints were collected

“Compete to collect the most checkpoints in the given time”

“Compete with all your Freemode competitors in a mad dash across southern San Andreas. Who will be the first to race or fly through all the designated checkpoints for fame, fortune and reputation?”

Checkpoints allows players to compete in collecting checkpoints located around a quarter of the San Andreas State, both on land and out at sea.

120 checkpoints will appear on the radar, spread out across one quarter of the State of San Andreas. The objective is simple: collect the most amount of checkpoints in the 6 minute time limit.

Players will be rewarded cash per checkpoint collecting, varying between $750 and $1,500 each, checkpoints are the same checkpoint icons used in Air Checkpoints. They will only be located on ground or out at sea.

The winner of first place will win an additional $4,500 on top of their earnings for the total checkpoints collected. Second place wins $4,000, and third place wins [amount].

In Checkpoints, players cannot use air vehicles to collect checkpoints. The player cannot checkpoints if they are in Passive Mode

This section contains insufficient information and is considered as a Section stub. You can help the GTA Wiki by expanding it as much as you can.
Requiring improvement: With 480 possible Checkpoint locations, we need plenty more.

Checkpoints will begin shortly in the [Location]. Compete to collect the most checkpoints in the given time. You will receive cash and RP for each checkpoint collected.
Collect checkpoints

for cash and RP. All participating players will receive a bonus if all checkpoints are collected.
Checkpoints may be collected on foot or in a land or sea vehicle.
You can temporarily view the expanded Radar by tapping 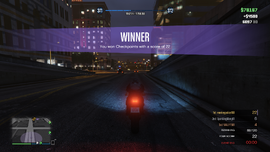 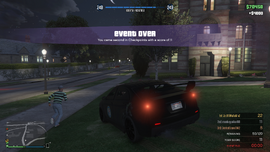 Most of the checkpoints are located on land, and those that are located in water are generally within a small distance from the shoreline. It's generally best to avoid wasting time reaching the shoreline checkpoints, although if needs be, the player can simply swim to reach these, or alternatively risk drowning their vehicle - some vehicles, such as the Guardian and Half-track can tolerate a very deep amount of water, making them more suitable to reach these quickly. These two vehicles are also suitable for off-road usage, and the Guardian has relatively good road performance.

Looking to bag Checkpoints at sea and on land quickly? Grab an amphibious vehicle. Know your vehicles:

The Blazer Aqua is handy for snatching Checkpoints in cramped spaces.

The Technical Aqua is a balanced vehicle with an average machine gun for a gunner.

The APC is an armored vehicle with a powerful cannon. Use it whenever you can.

The Stromberg is a fast land vehicle.

If a Checkpoint has a huge fight near it, grab an armored vehicle or get ready to kill.