Tommy Vercetti: "Which one of the boats is the fastest?"
Dwaine: "It's already in the water, dude, I though you might want to try her out."
—Tommy Vercetti buys the Boatyard.

It is available after the purchase of the Boatyard in Viceport, Vice City. The mission has 6 difficulties, becoming harder by changing the weather and time limit. Only the first one has to be completed to finish the asset though.

After the cutscene, the mission can be activated by the player, by either entering the Squalo or Cuban Jetmax located by the jetties. The objective of the mission is to collect 26 packages located across the waterways of Vice City within two and a half minutes. The countdown timer begins once the player enters either boat. Collecting all 26 packages and returning to the Boatyard within the time limit will complete the mission.

The reward for completing this is $5,000. The Boatyard will also become an asset and generate a revenue of up to $2,000 a day. If the player chooses to complete all 6 difficulties, a total of $50,000 is made. 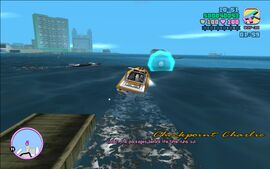 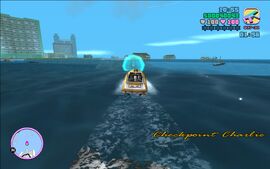 Tommy, about to go through the first checkpoint. 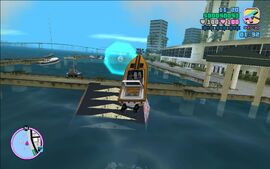 Tommy, about to go through a more tough checkpoint. 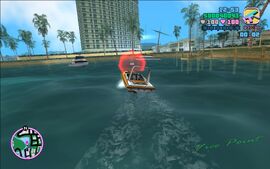 Tommy, about to go through the final checkpoint. 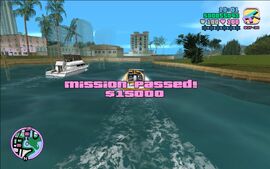 Mission passed; the checkpoints were drug packages and Tommy collecting them established his boatyard as a suitable front for cocaine trafficking.