In-game time
“Sometimes this line of work is not always pleasant, my friend. Those you love, those you respect, they betray you. A woman I trusted, a woman I paid generously, a woman whose hands are as dirty as mine - she is talking to the DA at the Viceroy Hotel. Silence her, and bring me a photo to prove it. And do not bring the cops to our meeting. ”

Check Out Time is a mission in Grand Theft Auto Online given to the player by Martin Madrazo. It is available for 1 to 2 players.

A woman who was previously an employee of Martin has betrayed him. She is talking to a DA in the Viceroy Hotel. The team is required to travel to the Viceroy Hotel and take out the witness. Upon arrival at the hotel, the team will find she is already driving her green Felon GT north on Palomino Avenue and they must intercept her before she reaches the Davis Sheriff's Station.

If the witness arrives at the destination without being spooked, she will stop at the gate and get out and run to the entry next to the Davis City Hall. If she arrives after being spooked on the way, the mission will fail as soon as she pulls up to the gate.

Once she has been taken out, the team must then photograph her corpse and then lose their wanted level. The job is completed when the team gets to Madrazo's house. 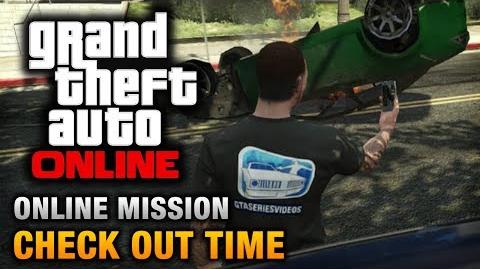