Standard White - 100%
“Don't be fooled by a lick of paint and polish: underneath the showroom finish the Cheburek is nothing but a lump of iron curtain that's been smelted down and hastily recast for the glories of the free market. As for the rumors that the exterior design was outsourced to a five-year-old with nothing but a crayon and a crippling hangover, we can only tell you that deregulated entrepreneurship is a wonderful thing and we support it 100%.”
— Southern San Andreas Super Autos description.

The RUNE Cheburek is a budget sedan featured in Grand Theft Auto Online as part of the continuation of the Southern San Andreas Super Sport Series update, released on May 29th, 2018, during the Madrazo Dispatch Services Week event.[1]

The Cheburek is a mix of various models of Lada Classic lineup. Its sides resemble the trimless sides of the VAZ-2101 while the front end is borrowed from the VAZ-2106. The rear is extremely similar to that of the Datsun 510, but relevant to the Lada line of cars is closer to the VAZ-2101, but with minor changes such as more detailed taillights and a rear mounted licence plate light instead of a bumper mounted light. The stock bumpers could be based on the VAZ-2107 bumpers, albeit with lower profile.

The design of the car is very simplistic, featuring a slightly angled front end, with a set of circular lamps located in plastic housings and a large grille with the manufacturer's emblem on the center, as well as a chrome trim around it. The cabin area features chrome trims around the windows and a set of square-shaped rear-view mirrors finished in chrome, along with plastic trims on the lower sides. The rear end is basically composed of rectangle tail lamps surrounded by chrome trimmings, as well as the license plate on the center and a "RUNE 1200" badge on the passenger side. Like many vehicles in the game, the rear passenger door windows of the Cheburek do not seem physically possible to roll down. The car's interior and dials are basically derived from the Faction and its variants, but features a dashcam mounted on the dashboard, which is unique to the vehicle. 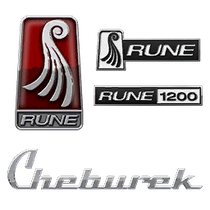 The car has a small Inline-4 engine, with the same engine sound as the Issi Classic, which is a high-revving, whiny engine. The car has high amounts of torque that cause wheelspin when under heavy acceleration. As expected for a small, less-powerful car, the Cheburek's top speed is average but makes up for its quick and responsive handling, with minor oversteer present at low speeds. Owing to its design inspiration, the suspension feels firm and planted to the ground. The car can easily power slide around corners even without performance modifications. Braking is acceptable. Crash deformation is acceptable, although the car's small mass allows it to be thrown around easily in collisions, with little effectiveness in ramming other vehicles.

The engine may sometimes emit a rattling noise and the transmission sounds clunky when shifting gears, even if the car is fully repaired. However this does not affect the car's performance and are only sound effects to make the car feel as though it is poorly built.

The Cheburek has all four advanced flags enabled[2]: 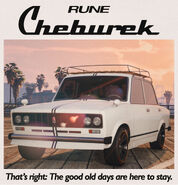 Official advertisement of the Cheburek. 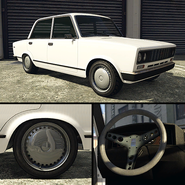 The Cheburek on the updated Rockstar Games Social Club.

The Cheburek in the cinematic preview on Rockstar Games Social Club. 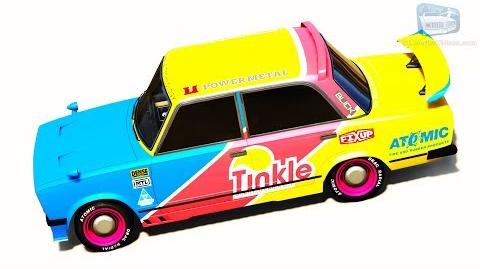