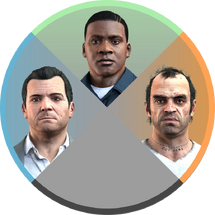 The Character Wheel is a feature introduced to the Grand Theft Auto series in Grand Theft Auto V. The wheel shows the protagonists of the game and gives the player the ability to switch between playable characters.

The wheel is divided into four quarters, each one for Michael, Trevor, Franklin, and the Online Player. Below each character is a number indicating how many missions are presently available for that individual. In free roam of Story Mode, the player can switch between characters at any given time, and when doing so, the player will occasionally find the chosen character in sometimes comical situations, including discovering the character inebriated or with a wanted level and being chased by police (these mostly occur with Trevor). When switching to the GTA Online character, the player will either find the character at a location defined in the Settings menu. If they are in a living space (i.e. Apartment or house) then the player may be in bed or in the shower.

Character switching is disabled if one of the protagonists has a wanted level, during side missions or in missions (unless these require two or all playable protagonists, such as Blitz Play), or if the player as Michael or Trevor enters Los Santos after finishing Minor Turbulence and before Monkey Business since they are being hunted by Martin Madrazo's men.

Retrieved from "https://gta.fandom.com/wiki/Character_Wheel?oldid=1190889"
Community content is available under CC-BY-SA unless otherwise noted.