GTA Wiki
Register
Don't have an account?
Sign In
Advertisement
in: Missions, Missions in GTA V, Side Missions

Chaos is a mission in Grand Theft Auto V. This mission is the first full session in GTA V between Michael De Santa and Isiah Friedlander.

Michael's dialogue at the beginning of the session will depend on the previous mission the player completed:

Friedlander asks Michael if he has had any other 'violent' urges. Michael's response will depend on the player's actions in the game. Sometimes, Michael will say that he feels like "two different people" and that he doesn't like either of them. He can also say that he "hurts other people without thinking" and then "feels bad" about it, calling himself a "sick hypocritical fuck". Regardless of Michael's responses, Friedlander offers some advice that the player can accept or reject.

Regardless of Michael's response, Friedlander asks Michael about his sexual behaviour, and Michael's response will again depend on the player's actions. If the player did not sleep with any prostitutes or booty calls, Michael will say that he had "thoughts" but didn't have any problems, or that he has been a "good boy" and didn't have any problems at all. On the other hand, if the player slept with a prostitute or booty call, Michael will say that he "got lonely" and called a girl, which Friedlander will chastise Michael for.

The session continues until Michael has a "breakthrough", before being interrupted by Friedlander, who claims their session time has expired. Following the session, Michael pays Friedlander $500 and leaves the clinic. 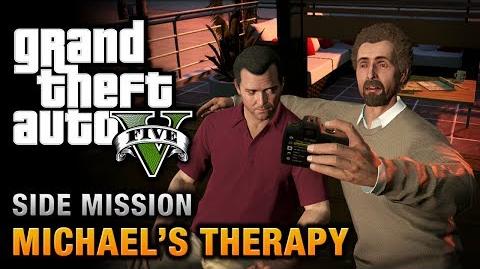