Channel 15 Studio is a TV studio inside a warehouse that appears in Grand Theft Auto: Chinatown Wars.

The TV Studio is located in a warehouse in Iroquois Avenue, Hove Beach, west of the Hove Beach Police Station and north of the Legal Marine Co. Inc. This is the warehouse that Channel 15, a television channel affiliated to Weazel, broadcasts from.

The studio only appears in the PSP version of the game. In Grand Theft Auto IV the building is simply a Cherenkov Vodka warehouse.

Spoiler Warning: Plot details, ending details, or both are in the text which follows.
After discovering that Melanie Mallard intends to reveal both Chan Jaoming and Huang's involvement in drug trafficking, manufacturing and distributing, Chan orders Huang to kidnap her and take her to the dock compound in Hove Beach. After infiltrating the Channel 15 studio in Hove Beach, Huang must shoot his way through an onslaught of security guards before kidnapping Melanie. Huang brings Melanie to the dock compound where Chan arrives shortly thereafter and kills her. 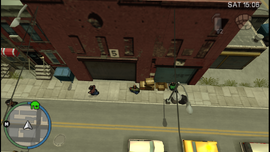 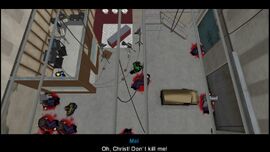 Huang Lee about to kidnap Melanie Mallard and kill her cameraman. 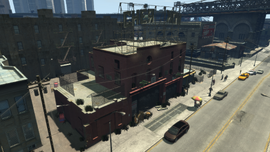 The warehouse as it appears in Grand Theft Auto IV.

Retrieved from "https://gta.fandom.com/wiki/Channel_15_Studio?oldid=1210290"
Community content is available under CC-BY-SA unless otherwise noted.