View source
watch 02:34
Fire Emblem Warriors: Three Hopes - The Loop
Do you like this video?
Play Sound
This article is about the character. For the mission, see Cesar Vialpando (mission)

Clifton Collins Jr.
“Look holmes, I love your sister. I honor her, she's my girl for life. This is why I stopped you from being skinned just then.”
— Cesar Vialpando to Carl Johnson in Cesar Vialpando.

Little is known about Cesar's life prior to 1992, though at an unknown point in time he joined the Varrios Los Aztecas, a Hispanic street gang, eventually working his way up to become the leader. Cesar also began a relationship with Kendl Johnson, to the disapproval of her brother Sean, the leader of the Grove Street Families. Cesar displays excellent driving skills, especially when it comes to lowriders. During Customs Fast Track, Cesar reveals that he is acrophobic.

Cesar first meets Carl Johnson at a lowrider competition. Despite Carl's initial distrust of Cesar, the two eventually form a close friendship and a working relationship between their two gangs.

Like Carl, Cesar and Kendl were forced to leave Los Santos after the savage Ballas' ambush on the Grove Street Families, and his gang's influence in the city diminished sharply. While in exile, he gets Carl into some grief by introducing him to his cousin, Catalina. After arriving in San Fierro, he and Carl cooperate to get revenge on the people who double-crossed them. Together, they were able to kill T-Bone Mendez. Later, Cesar puts his driving skills to good use by aiding Carl in obtaining several sports cars for their newly established car business.

The duo eventually return to Los Santos, and Cesar helps Carl and Sweet reclaim territories for the Grove Street Families. Carl repays Cesar's efforts by helping Cesar reclaim the Azteca's territories. During the same mission, Cesar informs Carl of his intention to propose to Kendl. Carl gives Cesar his blessing, but Cesar asks Carl to discuss it with Sweet because of the latter's earlier distrust of Cesar. Cesar appears in the final mission, where he witnesses Frank Tenpenny's death in the centre of Grove Street. He is later seen inside the Johnson House, and joins the celebrations when Madd Dogg announces his new gold record.

Cesar owns a red Savanna with a personalised number plate reading "LVA4L", which stands for "Los Varrios Aztecas for Life". During The Green Sabre, Cesar uses a grey Bravura with a tinted windscreen to spy on Ryder and Big Smoke and expose their betrayal of the Grove Street Families to Carl.

Cesar is revealed to be a kind, loyal, caring, and selfless person. His loyalty comes from when he stops his gang members from fighting with Carl in the mission Cesar Vialpando. He also assures Carl he will take care of his sister Kendl and make sure she is brought no harm, which is exactly what he does. When it comes to Kendl, he is genuinely kind and protective towards her, as seen in the mission Deconstruction where he attempts to confront the construction workers for harassing her.

The only negative characteristic of Cesar's is his lack of patience, as he might lose his temper if things take longer than planned. This is seen in the mission Puncture Wounds, in which he becomes very angry just because he failed to steal a car on his own. Cesar is also revealed to be afraid of heights, as seen in Customs Fast Track.

Cesar is quite the opposite of his cousin Catalina, who is a ruthless, selfish, and extremely arrogant person. However, Cesar still does not want others to disrespect her, seen by his reaction when Carl calls her a "bitch" in front of him. 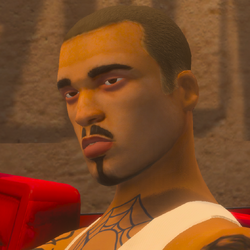 Cesar Vialpando in the Definitive Edition. 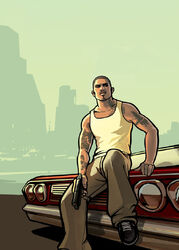 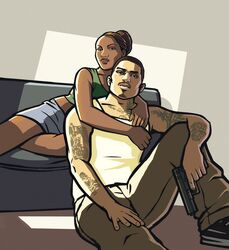 Artwork of Cesar with Kendl. 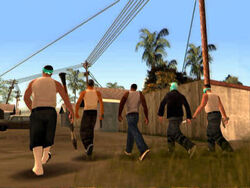