The Central Los Santos Medical Center serves the southern neighborhoods of Los Santos. It is bordered by Capital Boulevard, Crusade Road, Davis Avenue and Innocence Boulevard, in the eastern side of Strawberry. It is likely based on the LAC+USC Medical Center of Los Angeles[1]. Players will spawn here if it is the closest hospital upon being wasted.

According to signage, the hospital has departments of Urology, Radiology, Ultrasound, Endoscopy and Medical Physics, as well as an emergency room and a chapel. The hospital is connected to its own parking center via an inaccessible walkway just across Davis Avenue. This carpark is labeled as 'Medical Center Parking' by signs so presumably is for hospital patients use only, rather than general public.

Due to its location in a heavily gang populated area, the hospital is presumably quite busy and is always receiving patients (ambulances will often be seen leaving the hospital on calls). The medical center has also gained negative criticism for its bad doctors and healthcare in TV commercials of Mount Zonah Medical Center. 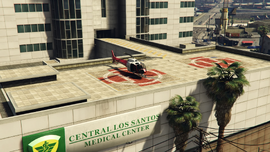 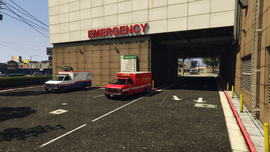