watch 04:21
Wiki Targeted (Games)
Do you like this video?
Play Sound
For the government agency in the HD Universe, see International Affairs Agency

Wikipedia has an article on:
Central Intelligence Agency

In GTA III, their first appearance is in the mission Evidence Dash, where a CIA agent drives a Bulletproof Bobcat. The CIA also monitors the Shoreside Lift Bridge when Ray Machowski tries to flee the city by flight. They are also said to have an interest in the Cartel-manufactured drug SPANK. Weapons include M16s, and Micro Uzis. They are portrayed as men with light skin, and dark clothes.

A CIA agent in GTA III.

Close-up view to a CIA agent, after failing the mission Marked Man.
Add a photo to this gallery

In 1992, they make another appearance when CJ attempts to obtain a package for Mike Toreno, and when he has to bomb a plane containing a consignment of land mines. While on board the Andromada plane, they utter strange phrases relating to speculated evidence of UFOs and aliens in the game.

In GTA: San Andreas, they appear with two different agents, both in black suits and ties with sunglasses. One is Caucasian with gray hair. The other agent is African American with a mustache; this agent never talks to Carl unlike the other one. These two could be a reference to the film Men In Black, or Rockstar Games placed them there to go along with the alien theme out in the desert. They have AK-47s along with the Micro Uzis. Their vehicles are special black Mavericks and special black Bobcats.

It appears that Toreno himself works for the CIA. The agents fought by CJ possibly means there is a rivalry between several divisions of the CIA. Alternatively, the men dressed in black suits may belong some other agency like the NSA. Toreno's dialogue in Highjack, Interdiction and Stowaway clearly mentions "a rival agency with a confused social agenda." 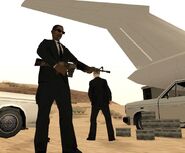 The black Maverick.
Add a photo to this gallery

Aleks Thornton is mentioned in the game files of The Ballad of Gay Tony as a minor character working for the CIA.

Bobcat
Add a photo to this gallery

Bobcat
Add a photo to this gallery

M16
Add a photo to this gallery

MP5K (presumably in the boxes spawned in Stowaway)

Land Mine (mentioned only)
Add a photo to this gallery

Retrieved from "https://gta.fandom.com/wiki/Central_Intelligence_Agency?oldid=1255126"
Community content is available under CC-BY-SA unless otherwise noted.