Overview of the Cayo Perico Airstrip.

Cayo Perico Airstrip, simply referred to as the Airstrip in-game, is an airfield in Cayo Perico, Colombia, which appears as an infiltration and escape point for The Cayo Perico Heist in Grand Theft Auto Online.

The airstrip consists of one large runway and a hangar large enough for one plane, used by Juan Strickler's employees for drug shipment distribution. Additional structures include three small buildings and a storage, a small control tower, a power station and a solar farm. Directly in front of its main entrance, near the buildings, is the "Bienvenidos a Cayo Perico/Gracias por Visitar Cayo Perico" welcome sign.

This is where the GTA Online Protagonist meets Juan Strickler for the first time, while posing as Keinemusik's tour manager.

The airstrip can also be used to travel back to Los Santos after scoping Cayo Perico during Heist Prep: Gather Intel.

“Aha, yes, yes, yes. This tower provides main coordinates of air defenses. You disable this when you are here for main operation, and we have some... interesting options. Maybe we can bring in reinforcements. I have some contacts who would be interested, I think!”
— Pavel to the GTA Online Protagonist

The Control Tower of the airstrip plays a role in The Cayo Perico Heist finale – it can be used to disable the island's air defenses via VOLTlab hacking, allowing players to call in any hired support crew members or use the airstrip to escape during the heist. It is marked down for all subsequent heists after completing the first playthrough. The player must have bolt cutters or a cutting torch to open the gate to get access to the tower's signal box.

Five of the support crew members require the player to disable the island's air defenses during the heist for them to be available for use via the Interaction Menu.

Aerial view of the Airstrip, Power Station and Solar Farm.

View of the interior of the hangar.

Alternative view of the hangar.

View of the smaller buildings adjacent to the airfield. 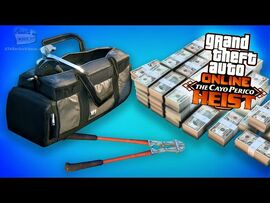