From top to bottom, left to right: aerial view of Cayo Perico, the welcome sign at the Airstrip, Keinemusik Beach Party on the West Beach, the Crop Fields seen from the Communications Tower hill, Juan Strickler's fortified compound, North Dock and Main Dock.

“With all the constant beach-side raving and free-flowing drugs from the nearby crops, the island would look like a trendy resort-turned-festival, were it not for the paid henchmen standing around holding assault rifles.”
— Rockstar Newswire

Cayo Perico (commonly referred to as just The Island or Paradise) is a private island in the Caribbean, off the coast of Colombia, that appears in Grand Theft Auto Online as part of The Cayo Perico Heist update.

Cayo Perico is considered one of the most secure private islands in the entire world, and the location of the remote island compound of the world’s most notorious drug dealer, Juan Strickler (also known as El Rubio).[1] It also contains an untold fortune in art, gold and drug money, scattered across the island.

Cayo Perico is not only the nerve center of El Rubio’s drug empire, but also plays host to his other great love: marathon beach dance parties, where everyone from jetsetters and heiresses to legendary music producers gather to rave until the sun comes up.[2]

The island first appeared in the "El Rubio Dossier" teaser released during the Los Santos Summer Special update, which contained views of three locations on the island, including a sprawling clifftop Spanish-style estate, a security tower and a farm.

“Cayo Perico... You wouldn't want to know how was it called before he [Juan Strickler] arrived.”
— One of the private security guards.

A Primitive Shelter is situated in the southeastern area, implying an untold prehistory.

Various artifacts around the island give hints to its history, including a cemetery near the airstrip, several collapsed obelisks, one of which forms the center point of a circular graveyard of 13 plots and relics from the Spanish Empire such as conquistador armor.

At some point, Juan "El Rubio" Strickler, one of the world's biggest narcrotraffickers, bought the island and made it the center of his criminal empire, and renamed it "Cayo Perico" (which translates to "Cocaine Cay"). He established enormous marijuana farms and cocaine factories on the island and installed an airstrip and two docks to distribute his products. Strickler also established a solar farm on the island to hide his activities using his green advocacy as a front. To generate more income, he opened a beach party on his island to hard partygoers to sneak his products in. On the southernmost part of the island is a mansion where El Rubio hides a collection of gold and other expensive and rare items such as a limited-edition, diamond-encrusted bottle of Sinsimito Tequila, a ruby necklace, several bearer bonds, a large pink diamond, and a diamond-encrusted panther statue sitting on a large sapphire ball. Any guest or criminal who attempted to steal from El Rubio were either shot to death or fed to El Rubio's pet panther, littering the island with corpses. Pavel stated there were successful heists in the past, but those who were behind them did not live long to savor their victory because El Rubio identified them by their weapons, and their bodies were "sent to the panther's cage in very small boxes".

Although the name of the island is "Cayo Perico"—which translates to "Cocaine Cay" in Spanish (or lit. "Parakeet Cay")—Cayo Perico is not a cay in the topographic sense, and is actually a high island telling by its rocky topography and elevation. With the exception of a few beaches, Cayo Perico contains little sand, with most beaches on the island being covered by small rocks.

Cayo Perico’s weather is always set to clear during heist intel or regular visits, therefore having no chance of rain or snow, although there is a very small chance that the weather can be set to a thunderstorm during the Cayo Perico Heist finale.

Most of the island’s flora are reused assets from Guarma in Red Dead Redemption 2.

While there are no native fauna seen on land, the wildlife is heard in abundance, including frogs, birds and snakes. A black panther is kept in captivity in El Rubio's compound. A mutilated shark and a stranded whale can be seen, and there are whale skeletons in the water. A Loch Ness Monster inhabits the surrounding seas. Schools of tropical fish can also be seen in the water.

The island is littered with many historical artifacts and interesting objects, some of which are relevant to the heist and will be able to be sent to Pavel during intel gathering for The Cayo Perico Heist. Others are just noteworthy for existing.

The surrounding waters are home to many Wrecks as well as a large meteorite in the far northwest.

There are many skeletons and corpses, some in plain view, some hidden.

A creepy graveyard on one of the smaller islands (aerial view)(Map).

A ritual hut within El Rubio's grounds, near his compound.

The island appears to be based on Norman's Cay (a.k.a. Cayo Norman), a small Bahamian island used by the Medellín Cartel as a transshipment base for smuggling cocaine into the United States and as a private party island, while the estates and welcome sign are based on Hacienda Nápoles, a luxurious estate built and owned by Colombian drug lord and Medellín Cartel leader Pablo Escobar. Cayo Perico's airfield also bears strong resemblance to Norman's Cay Airport, as seen in the map from El Rubio Dossier teaser. The party and the musical guests are also likely an allusion to the infamous Fyre Festival, a fraudulent attempt to host a luxury music festival in Norman's Cay that ended in utter disaster.

The shape of the island appears to be based on Canouan, a small island belonging to Saint Vincent and the Grenadines, mirrored and rotated.

Perico is also a slang for "cocaine" in Mexico and Colombia, referencing the fact that the island has a cocaine farm.

Cayo Perico is first visited in late 2020 when the GTA Online Protagonist accompanies English Dave to a party hosted by Juan Strickler under the guise of a management member. The player then sneaks off to scope out the island, by hacking into a communication tower to gain access to Strickler's compound's CCTV in order to find out where Martin Madrazo's files are being kept. Afterward, Pavel directs the player to scope out the North Dock and some secondary targets, before instructing them to continue scoping for infiltration, escape points, point of interests or return to Los Santos to prepare for the heist. Once all preparation works are done, the crew executes the heist, recover Madrazo's files and escapes.

Pavel later informs the player that they can return to Cayo Perico to pull off more heists once Strickler stocks up on more cash, gold, and other equipment to be robbed. The party was over, so the player must pose as smugglers in order to access the island again.

At any point during the heist setup, players can return to Cayo Perico to scope out additional information.

After completing the heist as host, players can return to Cayo Perico and attend the party in free roam. It's not possible to explore the island while the party's going on.

While the island does not make any appearance in The Contract update, it's mentioned that Pavel has visited Franklin Clinton's Agency (offscreen) in 2021, looking for the GTA Online Protagonist, and asking when the protagonist is going to take "another trip to the Caribbean", confirming they are still occassionally robbing El Rubio's Compound to this date. Franklin may also ask if the GTA Online Protagonist has ever been in the Caribbean, possibly referring to Keinemusik Beach Party.

Cayo Perico seen from the ocean. 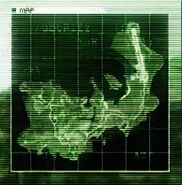 Map from the submarine's computer.

Keinemusik at the beach party.

Sand sculpture of the Loch Ness Monster, found behind the bar counter at the beach party.

A watchtower near El Rubio's Compound.

A drainage tunnel under water.

Aerial view of the Airstrip, Power Station and Solar Farm.

Aerial view of El Rubio's Compound and the surrounding grounds.

Aerial view of the Communications tower and farms.

Aerial view of the Main Dock. 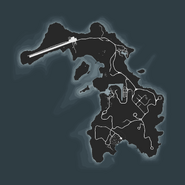 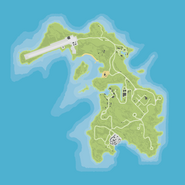