The Cavalcade is a larger but sportier SUV (in comparison to the Landstalker) obviously based on the second generation Cadillac Escalade, while portraying traits reminiscent of that of the Chevrolet Tahoe/GMC Yukon. However, it features an angular body design closer to the first gen Escalade and first gen GMC Yukon Denali.

The Cavalcade may come with or without roof racks and running boards, and will spawn in a variety of primary body colors with secondary front details, extras and accessories (normally set to white except for a single set with gold color). It uses a set of wheels with seven-spoke rims, which were later reused for the Super Drop Diamond from The Ballad of Gay Tony.

The Cavalcade retains the overall appearance as in GTA IV, except that, because of the simple design, it looks somewhat older. The rendition in the Nintendo DS appears to have similarities to the Rancher or the Bobcat, while in other platforms, it assumes a design closer to the GTA IV iteration, but without the extra details like the fog lamps.

“You could scarcely cross the street without getting mown down by a soccer mom or drug dealer in one of these during the early 2000s. The glory days of the excessively-large, gas-guzzling SUV might be over, but the Cavalcade takes no prisoners.”
— Southern San Andreas Super Autos description.

The vehicle returns with an identical design to its GTA IV iteration, with the only exceptions being the painted C-pillars and the painted rear-view mirrors, also featuring a horizontal chrome strip on the middle.

Color distribution changed in comparison to its previous iteration, as the secondary color is applied to the hood and the roof. The wheels retain the 7-spoke rim design similar to the ones seen on the GTA IV iteration, although the spokes are thinner in appearance and resemble the rims seen on the 3rd Gen Escalade.

“The old man luxury automobile, but once you sit inside this comfy car that steers like a boat, you'll know why your old man often fell asleep at the wheel.”
— Southern San Andreas Super Autos description.

Exclusive to Grand Theft Auto V and Grand Theft Auto Online, there is an updated version of the Cavalcade that looks more like the 3rd Gen Escalade, but the D-pillars are much more slanted. The tail lamps resemble those of the L405 Range Rover or the U502 Ford Explorer.

The vehicle retains the general profile from its older counterpart, but Daytime running lights are present on this version, as well as featuring a vertical grille, smaller fog lights, trims on the sides and a more integrated rear bumper with the license plate mounted on the trunk. This version sports a roof rack as standard.

The car is strictly painted with a single body color, although the interior stitching will be painted as well. Its stock wheels use unique 10-spoke rims wrapped in medium-profile tires.

Despite the sheer size of the Cavalcade, it accelerates quick enough to worry high-displacement saloons. The Cavalcade's top speed is rather high. The Cavalcade's brakes are strong, but seem to lack feel. The suspension is moderately firm, and will keep the Cavalcade surprisingly well balanced through the bends, though some oversteer can be felt on longer turns, an odd handling characteristic for a 4WD SUV to have. On rough roads or when clipping curbs, the Cavalcade is fairly unstable and at high speeds in these conditions is susceptible to tipping over. Crash deformation is minimal; the Cavalcade holds its shape after multiple accidents, though particularly strong front impacts can cause axle bending.

For its off-road performance, the Cavalcade performs reasonably well. With Herculean torque, this can climb steep hills and large rocks. The 4WD system helps keep the vehicle on the straight and narrow in even the worst terrain. With all-round independent suspension, the car often feels like it will rollover. However, if obstacles are tackled with reasonable speed, the player would have to be very unlucky to roll a Cavalcade. It is worth noting that if the vehicle is intended for off-road use, especially over boulders, then the version with side steps should be avoided, as these will be damaged easily.

The Cavalcade is powered by a high-displacement V8 (based on the engine cover), paired to a 5-speed gearbox in a AWD (50% front, 50% rear) layout.

The Cavalcades have a diesel engine which has the same sound as the Landstalker's diesel. The car performs similar to its GTA IV appearance, except it is lighter than in its previous appearance. While not intended for off-road purposes like most other off-road cars (such as Dune Buggies or Merryweather Mesas), Cavalcades are still a good option for uneven terrains thanks to its suspension. Its suspension is now firmer and stiffer than its IV counterpart due to the physics alterations. Acceleration and top speed seem to be a minor improvement.

Performance-wise, both generations are identical.

Note that only the first generation Cavalcade features visual modifications.

A Cavalcade with side steps in Grand Theft Auto IV. (Rear quarter view)

A Cavalcade with an ICE system in Grand Theft Auto IV. (Inside view)
Beta

The original Cavalcade seen with a chrome trunk door handle and lacking a badge.

Again the Cavalcade shown here with chrome C-Pillars also with the beta taxi.

The Cavalcade in hood view shown without its hood ornament.

The Cavalcade in the VIG Insurance commercial shown with small rims lacking bolts and various details. 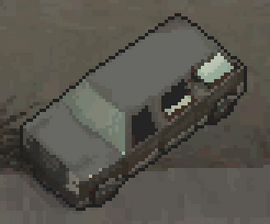 The Cavalcade in the Nintendo DS version of Grand Theft Auto: Chinatown Wars.

The Cavalcade in the PlayStation Portable version of Grand Theft Auto: Chinatown Wars. 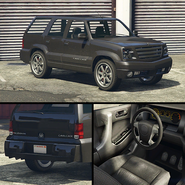 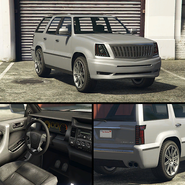 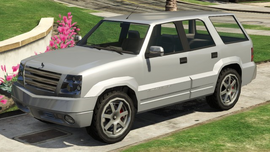 A unique dark grey Cavalcade replaces the Esperanto used by Roman's car service once the player completes Hostile Negotiation. However, the same driver, Mohammed, will be driving it and will still throw insults at Niko. Unlike Roman's Taxi, there is no enhanced performance in this version. 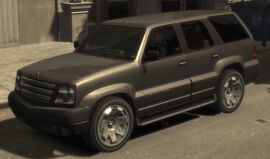 One of Roman Bellic's gray Cavalcades with Niko and Mohammed as occupants. 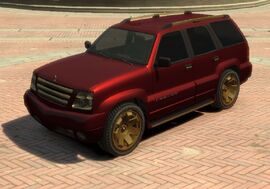 A modified variant of the Cavalcade driven by the Spanish Lords. (Rear quarter view) 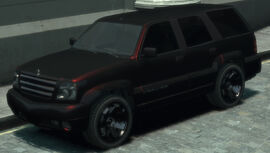 A black-trimmed Cavalcade from "Deconstruction for Beginners". Its body color may vary. 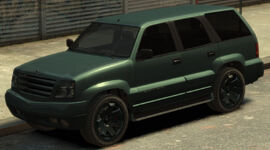 The Cavalcade requested by Brucie. 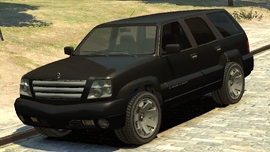