View source
watch 02:46
The Quarry - The Loop
Do you like this video?
Play Sound
Not to be confused with Caught in the Act, a mission in Liberty City Stories.

Money for Nothing
Havana Good Time
Robbing the Cradle

Forbes: "Yes. You're right, I am a cop. I was gonna tell you. I need money. I wanna work with you guys... I ain't gonna bust you."
Lance: "Not now you ain't. I'm gonna bust you!"
―Lance Vance confronts Bryan Forbes for being an undercover police officer.

Caught as an Act is a mission in Grand Theft Auto: Vice City Stories given to protagonist Victor Vance by his brother Lance Vance from the Hyman Memorial Stadium in Downtown, Vice City.

Victor goes to the Hyman Memorial Stadium in Downtown to see his brother, Lance. But Bryan Forbes is only there and after a while Lance appears angrily threatening Forbes with a gun. Lance tells Victor that Forbes is actually an undercover cop and after a short moment Forbes gets in a Stinger and attempts to escape. Victor and Lance follow him and after ramming his car, money comes out of the trunk and the pedestrians on the streets are seen running after the money. After a long chase, Victor makes a roadblock in front of Forbes' car. He and Lance take Forbes to a place in Little Haiti tied to extract information.

Aunt Enid: Have you seen your cokehead mother? She just left town...

Shortly after the mission, news breaks out on the radio about pedestrians being overjoyed after an unknown philanthropist threw money out of his car. The reporter later mentions that the VCPD are interested to talk to him for charges in loitering and hit-and-run. 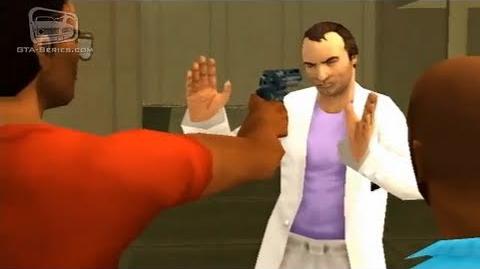