Caught With Your Pants Down

Luis about to shoot down the APC carried by Skylift.

• ­Shoot the bolts on the APC to release it before it reaches the police station.

• ­Take out as many cops as you can until they back down.

• ­Deliver the APC to the building site.

"I heard from a friend that we can get some real hardware...like a chopper but better, partner. Much better."
―Yusuf Amir

Caught With Your Pants Down is a mission in The Ballad of Gay Tony. It is given to Luis Fernando Lopez by Yusuf Amir.

In this mission, Luis must steal a NOOSE APC carried by a Skylift chopper for Yusuf and take it back to his construction site in Castle Gardens.

Get to Star Junction and get in Yusuf's Swift. Fly to the Skylift holding the APC. Once you get close enough, a cutscene plays. Yusuf will take the controls, and gives you an Advanced Sniper rifle. Shoot the yellow bolts holding the APC. Take out the back two then the front right and the other one (do this within 10 shots to get the Sharpshooter requirement). When the Skylift drops the tank in the air, jump out of the Swift and Parachute down to it, wherever it has landed. You now have a four-star wanted level; get to the Algonquin side and start destroying Police Cars (getting the Cop Cars Destroyed requirement is very simple). Instead of simply shooting, run over any cop car chasing you, as enough close range explosions will put the APC in flames, failing the mission. Once you're down to one star, escape the search radius normally and deliver the APC to Yusuf's construction site in Castle Gardens and receive your $20,000 reward. 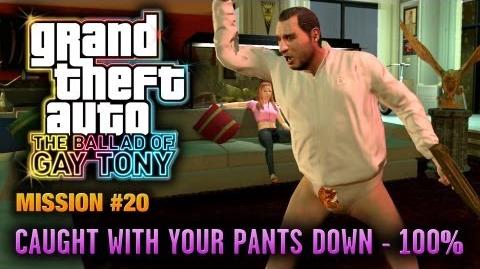 Retrieved from "https://gta.fandom.com/wiki/Caught_With_Your_Pants_Down?oldid=1288153"
Community content is available under CC-BY-SA unless otherwise noted.