Wikipedia has an article on:
Cat

Cats are often encountered roaming around urban areas of Los Santos and Blaine County or sleeping in quieter areas such as alleys. They may also be found sitting on walls and observing their surroundings. Cats are passive and their demeanour is generally calm, mostly ignoring the player, but they may run away if provoked, or if a weapon is fired nearby. There are several different coat patterns displayed by cats in-game, although all cats present seem to be of the Domestic Shorthair breed.

Between one to three cats can always be found outside the 24/7 in Sandy Shores, provided it is during the day and not raining - One will always be sitting on the wall next to the building, while the other two (if they appear) are either wandering around or resting in the alley.

In Grand Theft Auto Online, the player can transform into a cat after eating a peyote plant. 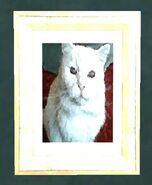 The picture of the white cat inside the Johnson House. 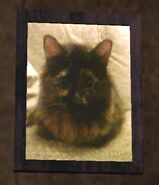 Kitten picture inside the Blueberry Safehouse.

Poster in GTA IV for the missing cat.

A cat appearing in a screenshot for Xbox One/PS4 version of GTA V.

A cat sitting on the wall adjacent to the 24/7 at Sandy Shores.