Bell to the drop-off point.

In-game time
“I been around long enough to know that there are some things that we don't have a choice about, but there's other times where you have to look at something and make a decision for yourself. I can't follow every order I'm given.”
— Niko Bellic

Catch the Wave is a mission in Grand Theft Auto IV given to protagonist Niko Bellic by Phil Bell at the Honkers Gentlemen's Club in Tudor, Alderney.

Niko meets Phil at a Strip Club in Port Tudor and Phil informs Niko that the Russians have smuggled drugs into the city from Vice City via boat and they haven't unloaded them yet. Niko and Phil get into a truck and drive to the docks in Charge Island. After they arrive, two Russians are waiting and ask Niko and Phil who they are. They both get out the truck and attack the Russians. After a shootout in the Docks, Niko and Phil steal the boats containing the drugs and sail them back to North Holland. 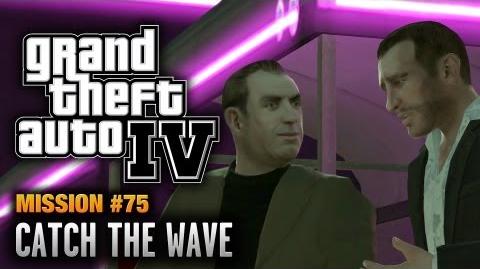