Spoiler Warning: Plot details, ending details, or both are in the text which follows.
“Well I got news for you, shooting you will be a pleasure but dating you was only business. You are muy pequeñito amigo!”
— Catalina to Claude in The Exchange.
“What kind of a man are you? When I say "just business", I mean that I love you! When I say I no interested no more, I mean that I long for you! And when I say that I missed you...!”
— Catalina as she hits Carl Johnson's car, before getting stopped by him, in Farewell, My Love....

Catalina is of mixed Mexican, Dominican and Colombian descent [1]. She began her criminal activities some point before 1992, when she met Carl Johnson at the recommendation of her cousin, Cesar Vialpando, meeting at The Welcome Pump in Dillimore, with Catalina fending off two men with a knife. The two become romantically involved (although, in CJ's case, it was reluctant), with Catalina putting Carl through an extreme form of BDSM before committing a robbery. The two begin to rob various "soft targets" identified by Catalina, including a Gasso gas station in Dillimore, a bank in Palomino Creek, an Inside Track betting shop in Montgomery and a small liquor store in Blueberry. Their relationship, however, becomes strained over Carl's desire for money to try to free his brother, Sweet, who was incarcerated by the LSPD. After the two separate, she begins a relationship with Claude and "helps" him in two races involving Carl and Wu Zi Mu. Johnson, who wins both races, wins a garage in Doherty, San Fierro from Claude, who leaves with Catalina on a nine-year journey to Liberty City; Catalina, however, continues to phone Carl and tease him about her relationship with Claude. The last phone call is received immediately after End of the Line, in which Catalina can be heard having sex with Claude to tease Carl.

After the Events of Grand Theft Auto: San Andreas

After arriving in Liberty City, Catalina begins discussions with and becomes the leader of the Colombian Cartel and, with some of their members (including Miguel), rob a bank in the city. After robbing the bank, she kills an unnamed accomplice and shoots Claude, leaving him for dead, and explaining that he is "small time," ending a nine-year relationship. She continues her criminal activities with the Cartel, increasing the production of SPANK and attacking the Yakuza on Staunton Island and the Leone Family on Portland. During this period, Claude managed to escape from an LCPD convoy with, unintentionally, help from the Colombian Cartel (who were seeking to capture the Old Oriental Gentleman) and began working for Leone made man and nightclub/brothel owner Luigi Goterelli. After proving himself, Claude begins to work for the Family Don, Salvatore Leone, who has him follow Luigi's Sex Club 7 barman Curly Bob to Portland Harbor, where he is seen to sell Leone secrets to Catalina and Miguel. Salvatore then has Claude and 8-Ball destroy a freighter used by the Cartel to produce SPANK.

Claude later flees to Staunton Island and begins to work for Yakuza co-leader Asuka Kasen who begins to attack the Cartel following the death of her brother Kenji at the hands of a "Cartel assassin," which was really Claude working on orders from Donald Love. Love later sends Claude to collect a package from a construction site in Fort Staunton, where he once again meets Catalina and Miguel, with Catalina shooting Miguel in the back and escaping empty-handed. Asuka, desperate to exact revenge for her brother's death, begins to torture Miguel for information, with Claude then using the information to attack Cartel interests, including destroying stands selling SPANK. During his time on Staunton Island, Claude also works for the Uptown Yardies, but he is later betrayed by their leader, King Courtney, who sends him into a trap organized by Catalina. Claude manages to escape.

Catalina later returns to the construction site and kills both Asuka and Miguel, and kidnaps Maria Latore, using her as a hostage and demanding a $500,000 ransom be brought to the Cartel headquarters in Cedar Grove. Claude decides to take the ransom money to Catalina and manages to escape an ambush, set up by Catalina, who escapes in a helicopter and keeps Maria hostage. Claude follows Catalina to Cochrane Dam, where he destroys the helicopter with a rocket launcher, killing Catalina and severely weakening the Cartel.

Catalina is described in various terms. In short, she is a psychopathic, self-centered, hotheaded, destructive, and reckless woman. The very dark, disturbing undertones of her personality suggest that she is mentally unstable.

She has an extremely short temper and can very quickly become irate in a matter of seconds. She frequently insults and verbally abuses those close to her (as seen with Carl and Claude), and has no regard for virtually anyone other than herself.

By her own admission, she is a misandrist. She considers men weaker than her, and this hatred most likely stems from her stepfather's cruel treatment of her as a child.

It is strongly implied in passing that she is a sadist and a cannibal; some of Catalina's psyche is brought to light during her robberies with Carl Johnson, and she often shoots at pedestrians, police, and anyone who gets in her way.

Catalina in The Exchange.

Catalina as she appeared in the 10th Anniversary edition of Grand Theft Auto III. 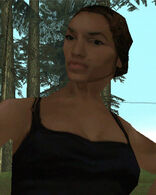 An LCPD photograph of Catalina for a Liberty Tree newspaper article. 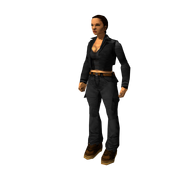 Catalina's 'GTA III PlayStation model. It is also briefly used outside cutscenes in the PC version.

Catalina's artwork as seen on the British box art of GTA III.