12:00
“Take the Casino's management and ownership team to discuss a buyout with the Duggan Investment Trust. Be ready for a tough negotiation.”
— In-game description.
“Mr. Cheng has agreed to a meeting with the Duggan Family. I'm worried... it's a very complex situation. They're clearly not above some fairly heavy tactics.”
— Agatha Baker.

“Hey. Are you busy? There's been a development with the attempted buyout, and we may need your help. Please swing by my office as soon as you can.”
— Agatha's phone call
Go to the Management area

inside The Diamond Casino & Resort to meet Ms. Baker.

The protagonists are contacted by Ms. Baker, who informs them about the attempted buyout of the casino by the Duggan Crime Family and seeks out their help. When they enter her office, they are greeted by her, Tao Cheng, and his translator. Ms. Baker tells the team that Tao has agreed to a meeting with the Duggan family, but is worried about how the buyout will go. Ms. Baker asks the team to come along with them to the meeting. Tao is now shown as more aggressive and serious than his usual drunken self, having been trained by Brucie Kibbutz, who Tao appointed as his personal trainer. His translator informs the team that Tao began a regime of high-pace exercises and bull shark testosterone, making him aggressive in the process. After Ms. Baker requests Debbie to have two Cognoscentis brought to the front of the casino, she and the team leave her office.

The team then drives Ms. Baker, Tao, and his translator to the meeting at Marlowe Vineyards. During the drive, they explain to the team the context behind the meeting, and the shadiness of the Duggan family. Once they arrive at the meeting, they are greeted by one of Duggan's bodyguards, who leads the group to meet up with Avery Duggan and his nephew Thornton Duggan. Avery tells Tao that he wants to buy the casino, wanting to discuss a fair price. Tao dismisses Avery's offer, with Tao's translator telling Avery the casino is not for sale. Avery tells them that they are making a very big mistake, and tells Thornton to take Ms. Baker to show her their expansion proposals that they were discussing about. Ms. Baker insists on staying, but Avery tells her that she should leave, reasoning that the deal is significantly above her pay grade. Ms. Baker acquiesces, and she and Thornton leave the meeting. The deal then turns sour as Avery's tone of voice becomes menacing and hostile, as he threatens Tao and his family. Tao then pulls out a pistol on Avery, officially triggering a violent conflict between the Triads and the Duggan family. Avery walks away from the meeting, and orders his guards to kill the group.

The team aids Tao and his translator in killing all of Avery's guards, who are seen arriving in Kamachos and Buzzard Attack Choppers, along with a pair of Caracara turreted trucks. In the middle of the shootout, Ms. Baker calls the team, who tells them that she was dropped off at the Pacific Bluffs Country Club, as the Chengs are members there. She asks them to come meet her at the club, while also questioning the sound of gunfire in the background. After the team kills all of Avery's guards, they, Tao, and his translator get into the Cognoscenti, and make a getaway to the country club while also dealing with more of Avery's guards.

The team, Tao, and his translator manage to successfully escape from Avery's men and they arrive at the country club. Ms. Baker asks how the meeting went, with Tao's translator telling her that it didn't go very well, and Tao declaring war against the Duggans. Ms. Baker thanks the team for their help, before going inside the country club.

Ms. Baker explains the meeting between Tao and the Duggans.

Driving to the vineyard.

Arriving at the vineyard.

Meeting with Avery and his nephew, Thorton.

Avery talks about his fondness for China to Tao.

Avery has Thorton excuse him.

An irritated Tao pulls a gun on him, escalating the situation.

"Where I come from... you don't get to pull a gun unless you're willing to use it, but maybe you do things differently in your parts."

Avery orders his mercenaries to kill Tao and his entourage.

Defending Tao and his translator from incoming mercenaries.

Fending off mercenaries coming from the vineyard.

More of Duggan's mercenaries arriving at the vineyard.

Clearing the car park of any further enemies.

Picking up Tao and his translator.

Going through a roadblock.

"I almost got killed at this country club once already. Never again."

Arriving at the country club. 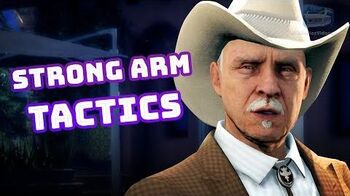 “我曾經差點在這個鄉村俱樂部被殺，一次就夠了！”
— Tao Cheng. (English: "I almost got killed at this country club before. Once is enough already!")}