In-game time
“Strike back at the Duggan family by taking out their oil and gas operations. Things will get heated.”
— In-game description.
“Avery Duggan runs a multinational corporation. Their principle interest in San Andreas is oil and gas. Currently, they have four tanker trucks in the city... you destroy them, then call us, move to the big target. Okay?”
— Tao Cheng's Translator.

Casino - Play to Win is a Casino Story Mission featured in Grand Theft Auto Online as part of The Diamond Casino & Resort update.

The protagonists are contacted by Agatha Baker, who informs them that matters have continued to worsen, and asks them to drop by her office. When they enter her office, they see Brucie Kibbutz, Tao Cheng, and his translator exercising to one of Brucie's exercising videos. Ms. Baker then dismisses herself from the office, telling the team that she's going to inspect the kitchens and that she was not at this meeting. Brucie then introduces himself to the team. Afterwards, Tao's translator tells the team that Tao's uncle wants to thank them for their assistance. Tao's uncle has contacted the group that they are set to go to war with the Duggans. Tao's translator says that Avery Duggan owns a multinational corporation, with their principle interest being oil and gas. He tells the team that there are four tanker trucks around Los Santos, instructing them to destroy all four of the tanker trucks and then call him to move to the big target. Brucie wishes the team good luck, as he, Tao, and the translator resume their exercise routine.

The team goes around Los Santos locating and destroying Avery's oil tankers pulled by Phantom Customs, while also dealing with Avery's men around the parked truck or escorting the vehicles in Kamachos. Tao's translator tells them that the oil tankers are located at Murrieta Oil Field in El Burro Heights, the Xero Gas building by Los Santos International Airport, and two of them are coming into the city from the north and the east. Ms. Baker then reiterates to the team that she knows nothing about their actions, but tells them that the Chengs will reimburse them greatly for disrupting the Duggans' oil and gas operation.

Once all five of Avery's remaining oil tankers are destroyed, Tao's translator contacts the team, telling them to leave the area. Tao then grabs the phone from his translator, delighted that the team destroyed Avery's oil tankers, and that nobody messes with him before telling Brucie to stretch him off. The team then leaves the area, ending the mission.

In a post-mission phone call, Ms. Baker tells the team that her inspection of the kitchens went swimmingly, and that she'll speak with them soon.

The players entering Ms. Baker's office to Brucie, Tao, and his translator exercising.

The trio return to exercising.

Fitting a sticky bomb onto the first tanker.

Being pursued by Duggan's mercenaries.

Arriving at the site of the third tanker, taking out the guards.

Preparing to throw a sticky bomb at a leaving tanker.

Destroying tankers scattered around the facility.

Leaving the area upon destroying all tankers. 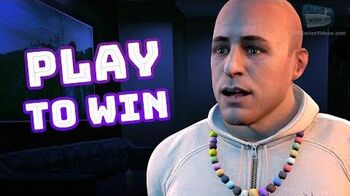