05:48
“Break up the party. Rescue Tao Cheng from a possible kidnapping at a derelict Blaine County motel.”
— In-game description.

Ms. Baker: "Tao... Tao Cheng, our owner who you met, has disappeared."
Tao Cheng's Translator: "Now normally when Mr. Cheng disappear for three days I think no big deal... party, few crashed car and everything's fine when I write a few checks..."
―Ms. Baker and the translator explaining the situation to the players.

The protagonists are called by Agatha Baker, who tells them that the thing she was trying to explain to them in their penthouse is the casino's troubles with the Duggan Family, who wants to do a complete takeover of the casino. If the protagonists want to help them out of the situation, they should drop by her office. Should things work out in the end, there could be significant dividends for them.

Go to the Management area

inside The Diamond Casino & Resort to meet Ms. Baker.
“Hello, this is Agatha, the casino and resort manager, again. Look, I tried to explain this in your penthouse, but... here it is... The Diamond may look brand new and sparkling, but it's actually in trouble.
The rebuild went way over budget, and the Chengs had to refinance.
The new debt came from these Texans, the Duggans, and now they wanna take over completely.
They're a multinational with interests in oil and gas, security services, and gambling, and if they buy us, they will strip out everything they can... every contract will be undercut, including your ownership of the penthouse. So... if you wanna help us get out of this, come see me in my office by Table Games. There has been a development.
If you do help, and this works out positively... there could be a significant dividend in it for you.”
— Ms. Baker
Go to the Management area

As the team enters the waiting room, they are greeted by her assistant Debbie, who tells them they're expected and to go straight into the office. Inside they are greeted by Agatha and Tao Cheng's translator. Agatha reiterates the casino's troubles with the Duggans, and they want to buy the casino so that they could destroy it, rebrand it, write off all of its debts, and make a cheap profit out of it before turning it into a tacky dump. She feels awful asking for the Protagonists' help, but reasons that she can't turn to the police and that they're trying to avoid a trade war or international dispute. Tao's translator tells the team that the Chengs are considered respectable businessmen, but Agatha truthfully says that they're not and that the Chinese government can't stand them: the translator acknowledges that, but he's paid to say so. Agatha then explains that Tao Cheng has disappeared. The translator adds that usually being gone for three days is not a big deal because it just means a party and a few crashed cars that he writes out checks to cover on Tao's behalf, but this time he hasn't returned. They think he's been kidnapped by The Lost MC when he was going to purchase crystal meth from a dealer contact in Sandy Shores, and the last thing the casino needs is another scandal. Agatha asks the team to head out there and look around for him, to which they affably agree. A humming Tom Connors then enters, offering champagne to the room.

The mission starts with the team traveling to the Derelict Motel, fighting through a horde of Lost MC bikers and finding Tao within the building (his exact location will be randomized between the suitable rooms of the abandoned building). Once Tao is found, he will follow the team and the rest of the mission involves the players transporting him to the casino with The Lost MC in hot pursuit, using Daemons and Lost Slamvans. The team manages to fend off the club and arrives back at the casino with Tao. The team escorts Tao inside of the parking garage of the casino, where Tao's translator and Agatha exit the elevator to meet them. While the translator leads Tao to the elevator so he can call his uncle back right away, Agatha thanks them for rescuing him, hoping this will be the last incident and that the situation with the Duggans will go away.

“Well, we're all grateful for the safe return of Mr. Cheng... I don't know how this place would run without him. Anyway, it's good to see you doing your part to keep this ship from sinking. We'll speak soon, I'm sure.”
— Ms. Baker's phone call

After Agatha calls, Tom texts the player with an official reminder that Casino Work can be requested from Agatha, although it should be noted that completing this mission is not necessary to 'unlock' it. Simply finishing the cutscene to claim the Master Penthouse is all that's needed.

“Hey, Tom Connors here. I just wanted you to know I've rarely seen Ms Baker so impressed with someone, and I've been trying for a while now. If you ever need more work, I have no doubt she could find a well-paid use for you. Give her a call sometime.”
— Tom Connors' text

Ms. Baker explains the situation with the Duggan family.

Ms. Baker requests the players that they can look around for Tao.

Arriving at the abandoned motel.

Stealthily taking out members of the Lost in pairs.

Taking out a Lost MC member.

Engaging in a shootout with the Lost MC.

Escorting Tao out of the motel.

Ushering Tao into the player's vehicle.

Arriving back at the casino.

Tao reunites with his translator and Ms. Baker.

Ms. Baker thanks the players for their assistance. 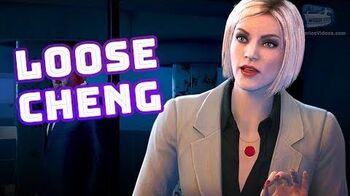