View source
watch 02:56
Raise a Floppa - The Loop
Do you like this video?
Play Sound
For the VIP Challenge, see Cashing Out.

Avery Duggan and his mercenaries

In-game time
“All bets are off as you deal with Avery Duggan for good, sending him off with a bang.”
— In-game description.

Tao Cheng's Translator: "Mr. Cheng will be very happy when Duggan's dead. Go to the ranch, take him out however you can. There'll be lots of guards, so get past them first."
Tao Cheng: "And tell him it's for me!"
―The translator and Tao Cheng.

Casino - Cashing Out is the final Casino Story Mission featured in Grand Theft Auto Online as part of The Diamond Casino & Resort update.

As the protagonists enter Agatha Baker's office, Ms. Baker regretfully informs them that Tao's uncle in Hong Kong has contacted her, telling her to sell the casino immediately because there has been too much "drama" surrounding it. Because Tao's uncle provided most of the funding to renovate the casino, neither Ms. Baker nor Tao can refuse him. Tao , his translator, and Brucie Kibbutz enter the office afterwards, all outraged at the situation, with Tao venting out his frustrations, angered that all the hard work put into the casino was all for nothing. As everyone is preparing to move their belongings and search for new jobs, Thornton Duggan suddenly shows up again with an offer. He proposes to save the casino by buying it out at full price from the Cheng family which will result in a transfer of ownership. However, there is a catch. Thornton admits he won't have that kind of money to spend unless somebody kills his uncle, Avery Duggan, which will result in Thornton receiving his full inheritance. Thornton tells the team that Avery has rented the La Fuente Blanca ranch just outside the city limits and that's where he's currently holed up. Afterwards, Thornton leaves the office, and Tao gives the order to the team to kill Avery for a lot of money.

The team drives to the ranch, where upon arriving, they can choose to take out the guards and cameras by utilising stealth via suppressed weapons. However, if they are spotted by one of the guards, fire an unsuppressed weapon, or the cameras detect a dead body or them, they will have to deal with Avery's backup arriving in Kamachos from the sides and a Menacer from the access road, along with those flying a Buzzard Attack Chopper and an FH-1 Hunter, making the mission more difficult. After the team takes out Avery's bodyguards, a cutscene plays where Avery and his remaining guards are seen evacuating the ranch in a Frogger, with the team giving chase. The crew can take out the guards in front of them and take the unoccupied Menacer from there if they wish to. On the way, guards in Buzzard Attack Choppers and Kamachos defend Avery (to the point of attacking the crew with missiles), but eventually, Avery's helicopter is shot down, killing him, and they give up the chase.

The team is then contacted by Ms. Baker, confirming that they've killed Avery. She tells the team to regroup back at the casino so that the ownership transfer of the casino from the Cheng family to Thornton can be finished. The team arrives at the casino, and is greeted by Vincent, who leads them to Ms. Baker, Tom Connors, and Thornton. Thornton congratulates the team, and with the deed done, he now has full ownership of the casino. Thornton also says that Tao is on a flight heading West. As everyone but Vincent celebrates with champagne, Thornton suddenly dismisses Vincent, who claims they don't need security, much to his own and the other casino staff's dismay. Vincent begrudgingly accepts his dismissal, bids the group goodbye, and everyone parts ways shortly afterward. Raising his glass, Tom quietly wishes Vincent "good luck, old friend."

In a post-mission phone call, Ms. Baker tells the team that she's finalizing the accounts before they go off to Thornton, and that there are some large cash reserves that don't seem to be in the deal they signed. She tells them that she's sent them the money as a dividend, as a way of thanking them for being instrumental in the deal. She then tells them to feel free to spend some of it at the casino before signing off.

Sometime after the call, the host receives a text from Ms. Baker, who tells them that she keeps finding assets that weren't included in the transfer of the ownership of the casino to the new holding company and that she keeps putting them in their name. She informs them to head to the Port of Los Santos, where she has left them a Enus Paragon R (Armored) car. Once the host collects the vehicle from the docks, they choose which of their owned properties to store the vehicle in, and from there, the vehicle is now theirs.

Ms. Baker informs the players of the current situation.

Brucie, Tao, and his translator enter the office.

Thornton gives his proposal to Ms. Baker to have his uncle assassinated.

Ms. Baker considers the offer, dismissing Thornton from the office.

Tao hands the offer over to the players with money as an incentive.

Tao and Brucie celebrate as the team head off to kill Avery Duggan.

One of Duggan's guards leaving the ranch.

Entering the premises of the ranch.

Stealthily taking out the guards.

Taking out another pair of guards patrolling the eastern end of the ranch.

Killing a guard patrolling the backyard.

Clearing the property of any guards.

"We've been compromised... we called in the chopper."

The guards usher Avery into the helicopter.

The helicopter prepares for take off.

Taking out his air support.

Avery fires a rocket launcher as the team attempts to shoot his helicopter down.

Driving back to the casino.

Thornton has Tom break out the champagne.

Thornton fixates his attention to Vincent.

"We will no longer require your services."

Ms. Baker gives her final thanks to Vincent as he walks away. 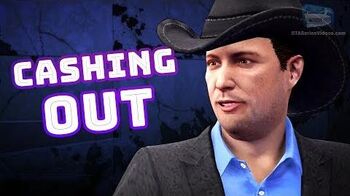