In-game time
“There's a meeting at the Casino to discuss the buyout situation, but you're not the only ones showing up.”
— In-game description.

Thornton Duggan: "My uncle, I-I think he's lost his reason over this. We've had a serious falling out. You know I... well I'm leaving the country... quickly. But I think he's sending some bad guys here."
Ms. Baker: "Again?"
Thornton Duggan: "No, these are very bad guys. I came to tell you myself, so there's no trace. Do what you want, but believe me, I had nothing to do with it."
—Thornton Duggan and Agatha Baker.

The protagonists are contacted by Ms. Baker, who tells them to drop by her office. When they enter her office, they once again see Brucie Kibbutz, Tao Cheng, and his translator exercising to one of Brucie's exercising videos. However, Ms. Baker becomes irritated at his methods on training Tao. Brucie reasons with her that he wanted to toughen up Tao so that he's capable of dealing with the Duggans. Ms. Baker argues that all she wants is peace, so that she can make the casino business work properly. Suddenly, Thornton Duggan shows up, much to Ms. Baker's dismay. Thornton says that he comes in peace and tells her and Tao that he still wants to buy the casino, or a slice of it. However, he tells Ms. Baker that he and his uncle Avery had a falling out due to Avery's ruthlessness and loss of reason to buy the casino in a fair manner. Thornton then informs them that Avery has sent his mercenaries to come and attack the casino, having told them that so there's no trace. Lastly, Thornton tells the group that he had nothing to do with it before leaving the office. Ms. Baker and Tao are at first suspicious about what Thornton said, when suddenly, Vincent barges into the office, telling the group that they have a prodigious problem. He tells the team to come with him up to the roof of the casino, as Brucie, Tao, and the translator resume their exercise routine.

Upon returning to the office, Ms. Baker thanks the team for dealing with Avery's mercenaries. She tells them that they must end this before things get worse. Tao tells her that he will speak with his uncle, and before Ms. Baker can go on, Tom Connors shows up with some champagne.

The players enter Ms. Baker's office to Brucie, Tao, and his translator exercising.

"You idiot... you idiot... since you turned up here... you know you're meant to be providing massages and smelly candles."

"What... you want Tao, a shark, to act like a seal... and wait for these Texans to come and gobble him up?"

Thornton warns the group of an impending attack from Avery's mercenaries.

"Do what you want, but believe me, I had nothing to do with it."

Vincent orders the team to come help him repel the attack.

A shootout with Duggan mercenaries.

Taking out their air support.

Clearing the garden before advancing to the eastern side of the casino.

Climbing up to the rooftop.

Taking out a juggernaut.

Tao and Brucie chest bump each other upon returning to the office. 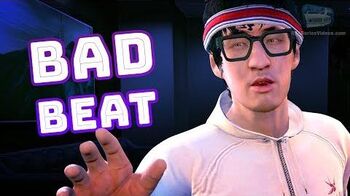