• ­Get to high ground and get some shots.

• ­Go to the vantage point.

• ­Go to the garment factory.

“Well, mapping the options and showing you all the angles, that's my area of professional expertise. But making decisions, that is your domain, my friend.”
— Lester Crest

Casing the Jewel Store is a mission in Grand Theft Auto V, given to Michael De Santa by Lester Crest.

Michael meets Lester at his garment factory before the duo drive to the Vangelico Jewelry Store. Once on location, Lester instructs him to walk in and use a pair of camera-glasses to take pictures of the displays, ventilation and alarm system.

Afterwards, the player must drive around the block and go upstairs to the roof via a building in renovation in order to scout for the store's ventilation sources.

Back at the garment factory, Lester sets up a planning board and offers two ways to execute the heist to Michael:

Choosing the Loud approach will unlock the following setup mission:

Choosing the smart approach will unlock the following setup missions:

The following characters are available to complete Michael, Lester and Franklin's crew.

* The player must first complete the character's stranger task.
** Only if Michael receives his call after the mission "Friend Request".

For maximum cash, the best choice is the Smart approach with Karim Denz for the driver, Rickie Lukens for the hacker, and Packie McReary for the gunman, rewarding Michael with well over $1.2M.

For efficiency, use Eddie Toh for the driver, Paige Harris as the hacker and Patrick McReary as the gunman. The Smart approach works best as the quickest it can be done is in 46 seconds, but Loud usually takes a minimum of 49 seconds.

Choosing Norm Richards for the gunman, even if you collect his bag after his crash, is still a worse choice because he adds casualty expenses and misses a lot of diamonds during the actual heist, meaning even if you smash all cases you still get only about $4.5M (the maximum take is $4,946,153).

Also, if you choose Loud, the gunman will have to keep all the hostages down and only the driver will collect the jewelry with Michael. If Karim is the driver, he won't get all of the jewelry, leaving you with $4.5M.

Lester telling Michael about his business.

Arriving at the jewellers.

Photographing the alarm, camera and a vent.

Talking to the cashier.

Setting up the planning board. 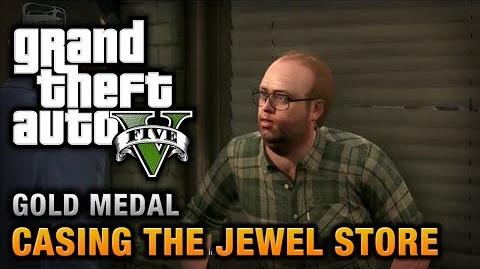 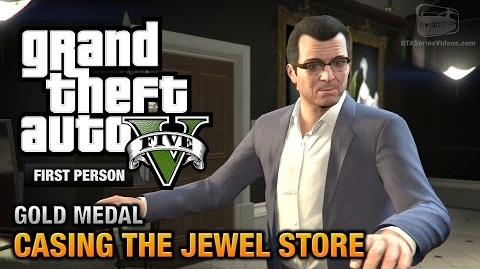 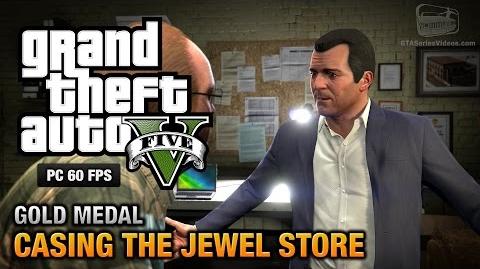 Retrieved from "https://gta.fandom.com/wiki/Casing_the_Jewel_Store?oldid=1321422"
Community content is available under CC-BY-SA unless otherwise noted.