Cash registers first appear in GTA: Vice City but are non-interactive, as the player commits robberies by aiming a weapon at the shopkeeper.

In GTA: San Andreas, cash registers can be destroyed by being shot at. They will drop money, but this cannot be picked up.

In GTA: Vice City Stories, cash registers are non-interactive, though they can be destroyed to threaten the clerk into dropping their cash.

In GTA IV, cash registers can be opened to steal various amounts of money, though doing so will usually grant the player a wanted level.

In GTA V, cash registers can either be shot at or the player can threaten the store owner to open the machine. 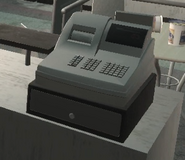 A cash register at Tw@. 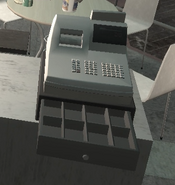 A register that was shot open.

A money bag dropped upon opening a register.