GTA Wiki
Register
Don't have an account?
Sign In
Advertisement
in: Vehicles, Vehicles in GTA Online, Vehicles in Heists Update,
and 6 more
English

Standard White - 100%
“Good looking and liable to explode at any moment - the only way this could be more of an Italian stereotype would be if it had mommy issues. The Casco is a 50s classic for polymaths and pederasts.”

The Lampadati Casco is a classic grand tourer featured in Grand Theft Auto Online as part of the Heists Update.

The Casco is an amalgamation of Italian supercars from the late-50's to early-70's, such as the Maserati 3500 GT, the Ferrari 250 GT SWB (especially the 250 GT Berlinetta Lusso and the GT/E) and early models of the Fiat 124 Sport Spider. It also takes some design cues from the Volvo P1800.

The Casco features a seemingly linear design, featuring a chrome front bumper that spans the entire width of the car and dual central intakes at the bottom. Right above the bumper, there is a large mesh intake with chrome trimming around, as well as circular lamps on the outer sections also surrounded in chrome. The bonnet features a small scoop that exposes part of the engine, along with the Lampadati logo in front of it.

On the sides, the car has dual chrome vents between the front wheel arches and the doors, while the rear wheel arches assume a flat shape on the upper portions. There are body lines passing through the upper areas of the sides, and owing to its era, the Casco sports chrome circular mirrors near the A-pillars of the cabin and chrome traditional door handles. The greenhouse area is mostly predominated by the chrome trims lining the windows and the rear separations, with the B-pillars being wider and painted with the rest of the car. The rear section is mostly flat and features a small boot compartment.

At the rear of the vehicle, the end of the boot lid bears the same body line created from the sides and the Lampadati badge on the centre, just below the aforementioned body line. The rear quarters of the vehicle have chrome light housings with red circular units, while the sections beside the units house a gas cap on the driver's side and a single circular reverse light on the passenger side. The lower area has a split rear bumper with the number plate in between, while the bottom has dual exhaust tubes in the centre. Its interior is shared with muscle cars such as the Dominator and the Buccaneer.

While the car is normally seen in a hard-top form, the roof is considered an extra[1], which also disables the front side windows when not present.[2] The removed roof also exposes the inner lines of the windscreen and door window frames.

The majority of the car's bodywork and the stitches of the seats are painted in a primary colour, while the outer surrounding of the front intake is painted with the secondary one. Additionally, it has a set of 8-spoke wheels unique to this vehicle, bearing a circular dish on the centre.

The Casco has great acceleration and a very good top speed thanks to its 3.6-litre, 220bhp V8 (according to the in-game website). The handling model gives it slight understeer and a tendency to slide, but it can be re-controlled with minimal effort. It has great durability against impact deformation, rivalling that of the JB 700, the Roosevelt and the Coquette Classic.

In terms of its engine, the position, type and layout is identical to the Stinger and Stirling GT, being configured in a front-engine, rear-wheel-drive layout, with a single overhead camshaft V8 with 4 double-barrel downdraft carburetors, laid longitudinally. The vehicle shares the same engine noise as the Coquette Classic (original version only), Stirling GT and JB 700 (enhanced version only).

A topless Casco in the original versions of GTA Online. (rear quarter view).

Notice the dim light despite the other lights turned off. This glitch has since been fixed. 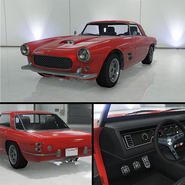 The Casco on Legendary Motorsport in the enhanced version.

The Casco on the updated Rockstar Games Social Club.

The Casco in the cinematic preview on Rockstar Games Social Club.

Poster of the Casco in Amalfi, Italy.