• ­Force the van to stop without destroying it.

• ­Don't let the van get away. (If the van goes too far away from player)

• ­Take the van back to Kenny's warehouse, and watch your back for anyone trying to stop you.

• ­Park the van inside the warehouse.

"Though so say it's dishonorable to attack lone traveler's, I say a rich fool can be the cause of much mischief."
— Kenny Lee

Carpe Dime is a mission in Grand Theft Auto: Chinatown Wars given to Huang Lee by Wu 'Kenny' Lee.

The player needs $5000 to pay for the property in East Island City in order to unlock this mission. Completing the drug dealing side mission is the best way to get the required money.

Uncle Kenny thinks he knows who stole Yu Jian. He suspects that some rich fool who is with the Spanish Lords is the robber who left Huang Lee for dead. He tells Huang to jack one of his vans and bring it back to his place.

First of all, the player needs to locate the van. It's in the Meadow Hills area, but once the player finds it, he will need to force it to stop, by either ramming it or shooting at the van, then take it. Quickly drive it back to the flat in East Island City and via the touch screen, cut the panel to search for the sword. Result: No Sword but a book showing recent deals for the Spanish Lords.

Shortly after the completion of this mission, Uncle Kenny will email Huang saying that the "rich fool" he just hijacked used to own a place in Lancaster in Algonquin. He found the keys to it in the van, and gives it to Huang.

Following this mission, the player can now hijack gang vans and take them to secluded safehouses to search the panels for hidden free drugs. Watch out as the more gang vans the player steals, the bigger the hate they receive from the gang. Also, sometimes the panels will have drugs in them, but others will not. All of the vans that are free for stealing are marked randomly with red arrows, but the vans will speed away if attacked members of the gang will shoot whenever they see the player in it (before raiding). The player can also now attain a five star wanted level. 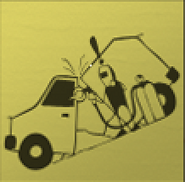 Carpe Dime
Add a photo to this gallery 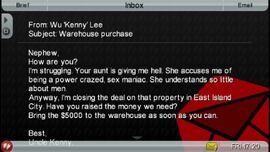 Kenny says he needs $5000 to buy a warehouse in East Island City. 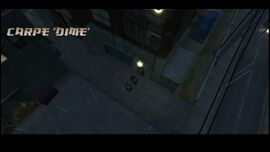 After buying the warehouse, Huang goes there to meet his Uncle. 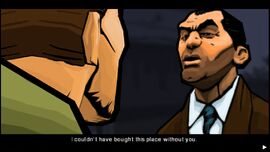 Kenny thanks Huang for buying the warehouse. 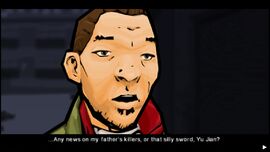 Huang asks if there's any news about his father's killers or the stolen Yu Jian sword. 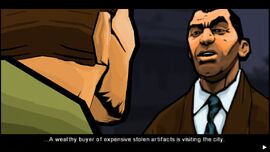 Kenny says there is an art dealer visiting the city. 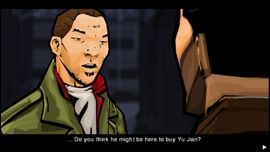 Huang asks him if he thinks the Yu Jian is with the art dealer. 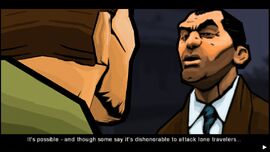 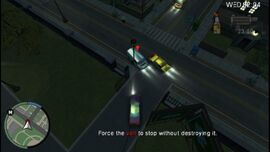 Huang finds the art dealer in Meadow Hills and forces him to get out of the van. 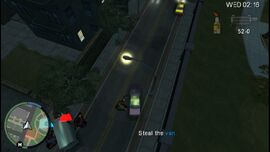 The art dealer and his bodyguard start shooting at Huang. 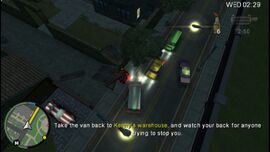 Huang kills the art dealer and steals his van. 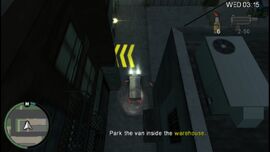 Taking the van to Kenny's warehouse. 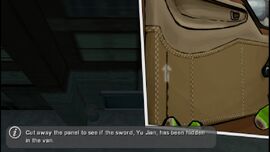 Huang cuts the panel to see if he can find Yu Jian. 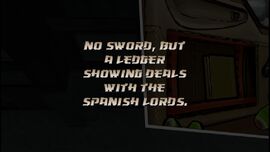 He doesn't find the Yu Jian sword, but he finds a ledger showing deals with the Spanish Lords. 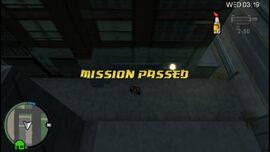 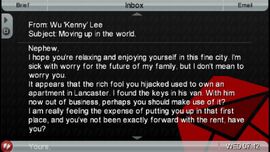 Kenny sends an e-mail to Huang, and tells him he found out that the art dealer used the own an apartment in Lancaster and he found the keys of the apartment and tells Huang that he can use the apartment.

"Thought a rich buyer was trying to get Yu Jian out of the city, but he was clean.

Still ... discovered that ripping off vans can be a lucrative side job." 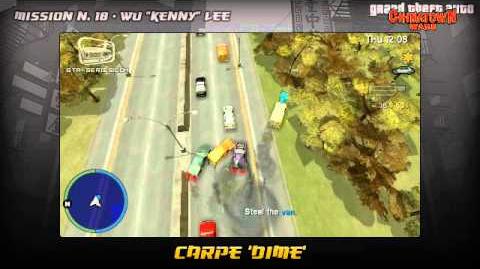 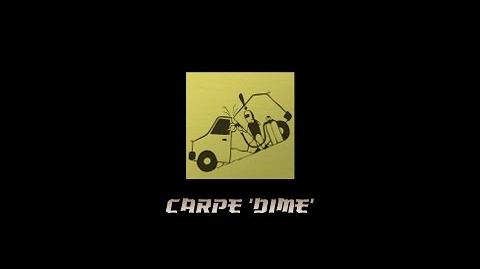 Retrieved from "https://gta.fandom.com/wiki/Carpe_Dime?oldid=1320243"
Community content is available under CC-BY-SA unless otherwise noted.