cargobob, cargobob3 & cargobob4
This article is about the helicopter, for the mission in Grand Theft Auto V, see Cargobob (mission).
“It's the flying bus you always dreamed of! The Cargobob is a twin-engine, tandem-rotor tactical transport helicopter that you'll recognize from the melodramatic airlift scene of every war film ever made. Maximum airspeed of 200 mph with a normal cruise speed of 150 mph, depending on how many pounds of cocaine or prisoners of war you have in the back. ”
— Warstock Cache & Carry description, Military version.
“With decades of experience in hazardous marine haulage, a company like Jetsam understands that million-to-one environmental disasters happen nine times out of ten. And when they do, you need air support. This ex-industry Cargobob has transported tons of chemical dispersants and dead sea life up and down the length of the Pacific coast, so you can be sure it'll handle whatever you throw at it.”
— Warstock Cache & Carry description, Jetsam version.

The Cargobob's fuselage is mostly reminiscent of a CH-47 Chinook for the bulging fuel tanks, engine, cockpit/nose design and rear loading ramp. However, it has been given a different configuration resembling the smaller Sikorsky S-92, with some design influences from the Mil Mi-8.

The Cargobob is among the largest and heaviest helicopters in the game (on par with the Leviathan), having a large fuselage with a rounded nose and large cockpit windows on the front, as well as a nose undercarriage with dual wheels. The main section is very large and features a tall compartment where the dual engines and the four-bladed rotor are seen, as well as black frames on the upper area, the main undercarriage on the rear corners of the underside and the cargo hold with a rear ramp door (albeit the ramp door is much shorter than the actual hold entrance). The tail boom has two horizontal stabilizers and a Fenestron-style tail rotor.

The vehicle will always spawn with a desert camouflaged livery (though files indicate it spawns in a white color); coincidentally, it spawns only in the Bone County area.

The Cargobob returns in Grand Theft Auto V and Grand Theft Auto Online, being a mix of the Boeing Vertol CH-46 Sea Knight with its tail boom and twin rotor layout, Sikorsky MH-53 Pave Low and Sikorsky CH-53 Sea Stallion with its nose and twin side mounted fuel tanks. Contrary to popular belief, it does not resemble a CH-47 Chinook, but in fact most resembles the CH-46 Sea Knight which, like the Chinook, has a twin rotor layout, but it is much shorter and has a three wheel undercarriage, as featured on the Cargobob.

Again, the Cargobob is among the largest and heaviest helicopters in the game (on par with the Skylift), having a large fuselage with a mostly flat nose and large cockpit windows on the front, as well as two air data sensors on the nose, large access doors and a single landing undercarriage. Around the main/rear section, the aircraft mostly consists of the cargo hold with two open access points, side steps and small square windows, while the upper area has tall rotor compartments with four-bladed rotors each. The engines are seen beside the front compartment, and a large intake is seen on the rear compartment, along with a protruding section for the driveshaft. The rear corners of the underside house the main landing undercarriage, while the rear end has the corresponding ramp door.

The interior of the aircraft is large and denotes a small elevation for the cockpit area in comparison to the cargo hold, having a wide instrument panel with digital screens on the center, and a single control stick for the pilot. The cargo hold allows two passengers on the access points and six passengers on the bench seats, which are simply teleported in when the front seats and access points are occupied. In the enhanced version, it uses the same "Lazer" dial set from aircraft such as the Shamal, the Luxor and the P-996 LAZER, with a layout that is mirrored for both halves of the panel.

There are two main variants of the vehicle:

Both variants use the same wheel design, being industrial wheels derived from trucks such as the Benson, the Mule and the Phantom. 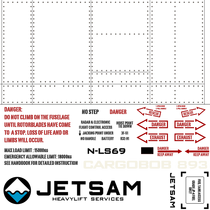 Although the Cargobob features an open rear loading compartment, it cannot carry other vehicles due to the ramp from the back being inoperable. Its huge weight causes the Cargobob to be incredibly slow, as well as making it very difficult to adjust altitude, turn, or conduct other evasive maneuvers. Although a military helicopter, it does not come equipped with flares. The Cargobob does, however, have very strong armor — it can take over 12 missiles before catching on fire and eventually exploding. This makes the Cargobob almost as resistant as the AT-400. However, on the iOS port, its health has been reduced to Raindance-level.

The Cargobob is a relatively slow helicopter and is easily less maneuverable than most helicopters in the game, though still easier to control than the Skylift, given its shorter profile and the fact that this helicopter does not use a tail rotor, but two main rotors in a tandem layout. Given its low speed and the large profile, the Cargobob is highly vulnerable to gunfire, rockets and, especially, weaponized aircraft. However, to compensate the sluggish handling, it has bulletproof windows, giving the pilot some time to take off when surrounded by enemies.

The Cargobob is powered by two turboshaft engines, powering two rotors in a tandem configuration. Its engine and rotor blade spin sound is rather unique, being a heavier and faster-pace variation of most helicopter sounds, possibly owing to the dual rotors working at the same time. The Jetsam version has a quieter engine and rotor blade spin sound.

Pressing right on the D-Pad or E on a keyboard deploys a grappling hook, which allows for it to carry vehicles (it can also carry some objects, such as certain shipping containers). When the grappling hook hovers over the car or another vehicle, it will automatically attach. The helicopter's maneuverability is affected by the vehicle that one will try to attach (a car could be easy, but a truck could be heavier to take off) and the winch can snap off if it is severely damaged. Note that the hook cannot be retracted and thus, will be deployed permanently unless it snaps off or when respawning the vehicle through the use of the helipad in GTA V.

Official screenshot of a Cargobob pursued by a Buzzard Attack Chopper.

The Cargobob's hook in GTA Online in use, carrying a Merryweather Mesa.

A Cargobob with its rear door opened.

A Cargobob deploying a Rhino to Paleto Bay during the mission The Paleto Score.

The Cargobob, as seen in the preview image of the mission "Cargobob".

Jetsam Cargobob with a red paint as seen in the Further Adventures in Finance and Felony trailer. 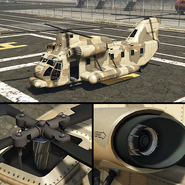 The Cargobob on Warstock Cache & Carry. 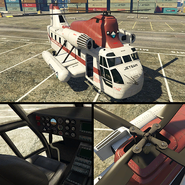 The Cargobob on the updated Rockstar Games Social Club.

The Cargobob in the cinematic preview on GTA V Rockstar Games Social Club. A Bullet is hanging from the hook.

The Cargobob in the cinematic preview on GTA Online Rockstar Games Social Club. A Turismo Classic is hanging from the hook.

The Cargobob (Jetsam) on the updated Rockstar Games Social Club.

The Cargobob (TPE) on the updated Rockstar Games Social Club.

The Cargobob (TPE) in the cinematic preview on GTA V Rockstar Games Social Club. A Submersible is hanging from the hook, as seen in The Merryweather Heist (offshore method).

A Cargobob with Trevor Philips Enterprises graffiti is used in The Merryweather Heist (Offshore method). This variant has similar paintings to that of the TPE Frogger and, at a closer inspection, fuel tanks slightly moved to the rear. In addition, the hook's chain length is doubled on this version, allowing for an easier maneuvering with the Submersible. 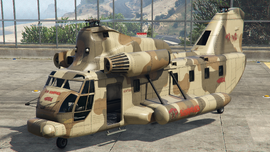 A variant of the Cargobob appears in the Executives and Other Criminals update for Grand Theft Auto Online. This variant appears to have side panels placed over the side doors and the rear bay of the helicopter is also much more detailed, as it is seen during the Adversary Modes it is featured in (see Prominent Appearances in Missions).

While this variant was added in the Executives and Other Criminals update, it remained unused until the release of the January 2016 Update, where it begins its use as a skydiving helicopter. The helicopter cannot be accessed during its appearances and cannot be obtained in regular gameplay. As it is not meant to be flown by the player, the helicopter's handling is unstable, greatly noticeable when the helicopter is on the ground. 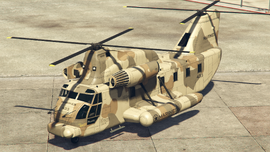 Both the standard Marines and the Jetsam variant of the Cargobob utilize a unique attachable magnet during the events of Grand Theft Auto Online, albeit the last case in the enhanced version of GTA Online only. This magnet was added, alongside the extended rope hook, in the Heists Update but is only used during certain missions.

The Marines variant utilizes this magnet during The Fleeca Job to pick up the players in the Armored Kuruma. The Cargobob is piloted by Eddie Toh.

The Jetsam variant utilises the magnet during Arms Embargo as part of the Import/Export update in the enhanced version of the game. Two Jetsam Cargobobs have the magnets attached and use them to transport Ruiner 2000s to Fort Zancudo. During this mission, the player has control of the magnet as they are able to disconnect their car from the magnet on command. 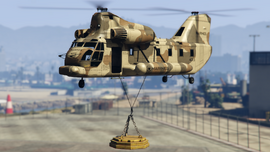 A Marines Cargobob with a magnet attached. (Rear quarter view) 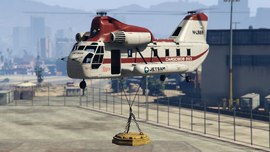 A Jetsam Cargobob with a magnet attached. (Rear quarter view)

Both the Marines Cargobob and Jetsam Cargobob appear with an extended version of the hook during certain missions, albeit only in the enhanced version. The hook model was initially added alongside the magnet attachment in the Heists Update but remained unused until the Gunrunning update for the enhanced version of the game. The extended hook helicopter can be kept after the missions for a short while, until it de-spawns. If it is landed on an office helipad to become session-persistent, it will revert to the short hook length.

This version of the hook is the same used in the TPI variant from The Merryweather Heist (Offshore method).

The standard Marines Cargobob appears during a Resupply mission involving stealing a Rhino Tank. The Cargobobs with these extended hooks appear parked near the Rhino Tank during the mission and can be used to carry the Rhino Tank. The helicopter itself is also much more durable than any other appearance it makes. This particular Cargobob can be kept after the mission and makes good use as it is still able to hook onto vehicles. However, its durability will return to its normal state.

The extended hook makes another appearance as of the Smuggler's Run update, where a Jetsam Cargobob uses the extended hook to carry containers during an Air Freight Cargo Sell Mission. The helicopter cannot be kept after this mission. 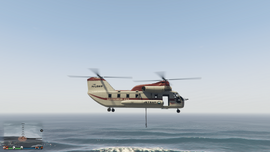 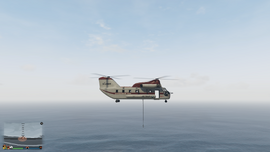 The "Drop Zone" variant appears in various Adversary Modes where players parachute from the rear bay: