Cardiaque products can be found for sale in 24/7, Rob's Liquor and Limited Service convenience stores around San Andreas.

Their alcohol is marketed as a five star "Fine Napoleon Brandy" on the label. Cardiaque Cigarettes are also a sponsor of Arena War events, where, (like Redwood Cigarettes) they advertise their cigarettes as alternatives to vaping.

Judging by the company's name and the Nepoleon reference, it's very likely a French company. 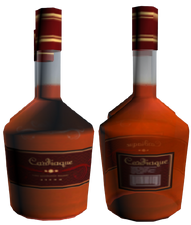 Arena War advertisement.
Add a photo to this gallery

Retrieved from "https://gta.fandom.com/wiki/Cardiaque?oldid=1283093"
Community content is available under CC-BY-SA unless otherwise noted.