supercar_2_eur_v8
“It's no shock that a country in which a man had no qualms about dressing in a canary-yellow thong would know how to produce vehicles that get you noticed. The Carbonizzare is the ultimate sports car for the millionaire who wants people to know that they're a millionaire.”

The car's design draws clear inspiration from British-Italian styling found on the Aston Martin V12 Zagato and Ferrari F12 for the rear fascia, front and rear quarter paneling, along with the almost identical wheel design as the Aston. The headlights, front bumper ducts and integrated LED daytime running lights appear near identical to those of the TranStar Racing Dagger GT. The car's convertible feature is based on that of the Ferrari California, while the V12 Zagato does not feature any folding roof mechanism.

The front end of this car is created with a range of lines and curves. The front bumper features a large central intake, spanning half the car's width. Either side of this intake, there is a smaller intake with an 8 LED, daytime running lamp strip adjacent to the top edge. The car features quadrilateral shaped headlamp units which have a strip of 10 LED's along the lower part of the inner edge. The outer area features three circular lamps, the highest one being the amber turning indicator lamp. The bonnet/hood features impressed areas whose edges are parallel to the inner edges of the headlamp units, and the Grotti emblem just in the frontal area. This hood/bonnet opens to reveal the engine bay and the strut brace.

The main body of the car has a high prevalence of curves. The front quarter panels are dominated by the presence of a large air intake with a chrome strip near its top edge. The A-pillars of the car are covered with a black polymer. There are carbon-fibre wing mirrors mounted just below the A pillars at the front of the door. The greenhouse features a very curvy lower window line. It also features a very smooth and elegant B-pillar area, positioned after a thin window channel after the door. The rear quarter area bulges outwards and is wider than the main body area, and much wider than the rear of the greenhouse. The rear quarter area has an upper edge that follows the shape of the rear wheel arch.

The rear is both smooth and sharp in areas. At the top of the car's rear face, on the corners are the tail-lamp units, being an almost semi-circle cut out. Inset in the cut out are two circular lamps. The rear bumper of the car features very curved side edges, making more of the rear tyres visible. The lower area of the rear bumper is dominated by the presence of a distinct aerodynamic formation. The formation is split into two levels, the upper level features circular exhaust tips, one either side of the license plate. The bottom level features a large seven blade, six element carbon-fibre diffuser.

The car features a tan coloured interior, in a similar manner to the Super Diamond. In the enhanced version, it uses a dedicated "Schafter Brown" interior, which is a derivative of the one used on cars like the Schafter and the Tailgater.

The car only has a single colour for the body and the interior stitching, and uses a set of wheels similar to the "Hypher" high-end rims available in Los Santos Customs.

The Carbonizzare is a fairly middle-of-the-road Sports car, with good acceleration and top speed. Its handling is very well balanced between understeer and oversteer, making it easy to drive and hard to spin out. Understeer is more pronounced at higher speeds but is easily manageable. Crash deformation is acceptable compared to other Sports cars, but it won't take many collisions for performance-reducing damage to occur. While very well balanced in its entirety, the Carbonizzare's lack of distinction makes it a fairly meager choice for a racing vehicle. Overall, the Carbonizzare is a solid choice for newer players but lacks potential in more skilled hands.

This car features a front-mounted modelled twin-cam inline-4 engine with a cylindrical air filter mounted on its intake manifold. Despite being modelled as a inline-4, it sounds more like a high revving, flat-plane V12. It has a 6-speed transmission and a front engine, rear wheel drive layout.

Official screenshot of the Carbonizzare.

A Carbonizzare racing down the streets of Los Santos in the enhanced version of Grand Theft Auto V.

Carbonizzare with its roof up. (Rear quarter view) 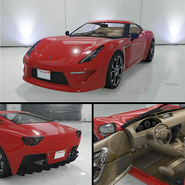 The Carbonizzare on Legendary Motorsport.

The Carbonizzare on the updated Rockstar Games Social Club.

The Carbonizzare in the cinematic preview on GTA V Rockstar Games Social Club.

The Carbonizzare in the cinematic preview on GTA Online Rockstar Games Social Club.