Standard White - 100%
“This superbike from Nagasaki is extra lightweight because of its carbon body, resulting in a very fine line between "joy to drive" and "infernal deathtrap". It's a line worth treading.”
— Legendary Motorsport description.

The Nagasaki Carbon RS is a sport bike featured in Grand Theft Auto V. It is available exclusively to players who bought the Collector's Edition in the previous gen version. However, it appears as a normal vehicle in the enhanced version.

The bike's design appears to be inspired by the Italian styling featured on the Ducati 1199 and EBR 1190RS.

The bike features a sporty bodywork that is prominently made from CFRP (hence the name "Carbon"). The front fender is directly mounted on the silver/chrome fork legs, while the handlebars are mounted independently on the upper clamp. The frontal area of the fairing houses the main lamps, two mirror holders and a curved windscreen. There is a small panel containing the "Sports Bike" dials, which are the same as the ones from the Akuma and the Bati 801.

On the main body, the same fairing covers part of the sides and the lower area of the engine bay, having twin exit vents. Over the silver/chrome section, there is the fuel tank and the rear fender with support frames below and a small black seat over it. The exhaust tubes can be seen coming from below the engine and splits into two long tubes.

On the rear area, the rear fender has an additional support holding the license plate and the corresponding tail light units. The rear wheel is connected to the bike by a left swing-arm, which also holds a rear mudguard and is supported by a single suspension shock/spring, with the corresponding chain drive on the left. Two carbon exhaust mufflers are also seen on either side of the rear wheel.

Because of the CFRP body, the bike lacks any respray option, even though in the game files, it is listed with a white colour. It uses a set of carbon-fibre rims that are similar to the "Speedway" rims seen in Los Santos Customs.

In the enhanced version, the Carbon RS sports front indicator lamps on the mirror holders, in a similar manner to the NRG 900 and the Thrust.

The Carbon RS is a lightweight bike with a short wheelbase and as expected, it is very nimble; it can easily perform both wheelies and stoppies. However, the bike has only an average top speed, which can be easily beaten by the Bati 801, although its acceleration and maneuverability compensates the top speed, matching the other sports bikes.

The exhaust manifold of the bike defines the engine as a 4-cylinder and has a 5-speed gearbox, with the website claimed to be a 999cc engine pushing 196hp. It shares the same engine sound as the Akuma and the Double T. 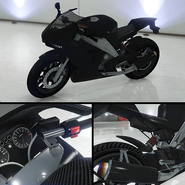 A Carbon RS on Legendary Motorsport in the enhanced version of GTA V.

The Carbon RS on the updated Rockstar Games Social Club.