Not to be confused with Carbine Rifles, a heist setup in GTA V.

"Combining long distance accuracy with a high capacity magazine, the Carbine Rifle can be relied on to make the hit."
―GTA V description on the Rockstar Games Social Club.

The Vom Feuer Carbine Rifle or M4 is an Assault Rifle that has been featured in every GTA game since Grand Theft Auto III, except Grand Theft Auto Advance. It is useful in almost any situation, boasting accuracy, power and magazine capacity.

Throughout the games, the models differ slightly, along with zoom capability, rate of fire, and stopping power.

GTA III's rendition has considerably lower quality than its successors, apparently resembling the Armalite AR-10, judging by the handguard and the overall shape. The fact that the AR-10 fires 7.62x51mm ammunition as opposed to the less powerful 5.56x45mm ammo of M4/M16 rifles possibly explains why this weapon was far more powerful per shot than the M4-type rifles of later games, and the 7.62x39mm AK47. This is a rather odd choice, since the AR-10 is a considerably old rifle who was mostly in service in European countries (Such as Germany, Portugal and Italy) during the 50s and the 60s, and is therefore considerably hard to find in America. The weapon has a 60 round magazine, even though the one modeled in-game looks like a regular 30-round AR magazine.

Vice City's rifle is modeled after a Colt Model 733 but with the front sight facing backwards. It is called 'M4' in-game (Which is anachronistic, as the M4 was not introduced until 1994). Originally, the beta featured an assault rifle that resembled an M16A2, but it was later replaced by the current model. It also appears to have an aftermarket crane stock. The beta rifle's model can still be found in the game files and can be seen in the intro cutscene.

GTA San Andreas reuses the model from Vice City, again called 'M4' in-game (And again inaccurate since the game is set in 1992). In the mission Stowaway, a government agent is shown holding a camouflaged variant of a Colt M16A1. This, however, is never available to use in-game. This was probably a beta model. In GTA Liberty City Stories, it once again uses the Vice City and San Andreas model. With the game being set in 1998, the name M4 is now used correctly.

Vice City Stories features a rifle resembling the M16A1, named 'Assault Rifle' in-game. It uses a similar model from the previously mentioned San Andreas mission Stowaway, sans the camouflage. Lance Vance again refers to it as an "M4" during a mission, which is an anachronism.

GTA IV features a rifle based on the Colt M4A1, titled 'Carbine Rifle' in-game. This version is accurate both in timeline and overall features, including accurate weapon specs such as rate of fire, magazine size and appearance. Interestingly, the carry handle has been replaced with an aftermarket drum sight. It also has "Property Of Liberty City Arms" stamped where the magazine release is normally found, probably a reference to the "Property Of U.S. Govt" stamped on its real-life counterpart.

GTA Chinatown's rendition is difficult to identify, but it is has a full stock and long barrel, and the triangular hand guard as seen on the HUD suggests it is based on the Colt M16A1. It has, much like in San Andreas, a 50-round magazine.

GTA V's rendition of the Carbine Rifle is based on a mishmash of different AR-15s, featuring almost identical parts (with regards to the lower receiver, especially the magazine well, and also the gas block) that was possibly influenced by the Remington R5 RGP and  Heckler & Koch HK416 . The pistol grip seems to be a combination between both Ergo and Hogue grips. The trigger housing is similar to the Magpul Enhanced Trigger Guard. The upper receiver seems to be influenced by the VLTOR MUR-1 upper receiver, with a raised Picatinny rail, similar to the HK416. It also has dual mounted iron sights on the main Picatinny rail. There are also some influences from a Daniel Defense DDM4V7, notably the handguard, which is the Daniel Defense Modular Floating Rail (MFR) 9.0, and complete with an aftermarket buttstock. In the Xbox One, PS4 and PC versions of the game, the Carbine Rifle's textures are much more detailed, having stampings and pins on the receiver that aren't visible on the Xbox 360 and PS3 versions. It is manufactured by the Austrian company Vom Feuer, as seen inscribed in the updated model (which may be again an allusion to HK416 - being an American design produced by a company from a German-speaking country).

The GTA III version of the rifle differs from any other variant for how powerful it is: Featuring an exceptionally high rate of fire and an unrealistic 60 round magazine, it is always a one shot kill against any enemy in any part of the body and can easily destroy most vehicles with a few bursts, making it arguably the most powerful firearm in the game. One might even compare it to the Minigun or the M-60 seen in later games. Similar to the Sniper Rifle and the Rocket Launcher, the rifle can be aimed in first person, resulting in a stationary view with the crosshair on the center of the screen. Despite its power, the Carbine Rifle in GTA III suffers from wild and nearly uncontrollable recoil- even when being aimed in first person.

The M4A1 in GTA Vice City is a much less powerful rifle than its GTA III predecessor, and despite still being a one-shot kill in nearly all occasions, it now features a slower rate of fire and a 30-round magazine. On the other hand, the recoil is also much lower this time around, making it useful for more precise shots. Like in GTA III, it can also be aimed in first person.

The GTA San Andreas version has an even lower rate of fire than unusual for an assault rifle, and it also has considerably less power, now only being a one-shot kill weapon if aimed at the head. Even though, it is still highly effective, featuring a 50-round STANAG magazine and a smaller crosshair than that of the AK-47, making it useful for more precise and accurate shots. It doesn't feature a first person aiming mode like its predecessors did, and neither do any of the following games have it.

The rifle in GTA Liberty City Stories and Vice City Stories is closer to its Vice City version, having a similar rate of fire and being a one-shot kill against most enemies. It also features a 30-round magazine in both games.

In Grand Theft Auto IV the performance of the Carbine Rifle is stellar. Accuracy and fire rate are both high, along with damage. It is highly effective in close to mid range, with accuracy dropping off at long range. Accuracy is even higher when crouched, allowing the player to fire it on fully automatic while being able to reliably hit targets. It has the longest range of any non-sniper weapon in the game. It's not as powerful as the AK-47, but its precision and fire rate still make it nonetheless one of the best rifles in the game.

The Chinatown Wars version is incredibly powerful, being almost comparable to the one present in GTA III, with a few bursts being enough to easily kill an enemy and destroy a vehicle. Its fire rate is also exceptionally fast, being able to quickly empty its 50-round magazine.

In Grand Theft Auto V the Carbine Rifle is superior all-round to SMGs, and is more accurate but less powerful than the Advanced Rifle. Still, it is a very accurate weapon that can be relied on for any situation.

In Grand Theft Auto: Vice City it is used for the first time in Rub Out, where Lance gives Tommy an M4 to kill Diaz. After the mission it can be bought at the Downtown Ammu-Nation. Then during Cop Land, a police officer and two soldiers are seen using the rifles. They can also be seen at Fort Baxter Air Base being wielded by soldiers.

In Grand Theft Auto: San Andreas, the M4 is used by the army at a six star wanted level, during Black Project, Up, Up and Away! and Vertical Bird, and by some gangsters during End of the Line.

It is a very rare weapon during the course of Grand Theft Auto: Liberty City Stories, being used only by Forelli Family hitmen in Love on the Rocks, Kazuki's guards in Cash in Kazuki's Chips , and by Massimo's guards in The Sicilian Gambit.

In Grand Theft Auto: Vice City Stories, it is used in various missions (most notably when Lance uses it in Blitzkrieg Strikes Again), and can be bought at Ammu-Nation upon unlocking Ocean Beach following From Zero to Hero. Soldiers at Fort Baxter Air Base can once again be seen wielding the rifle.

In GTA IV, the Carbine Rifle is given during Three Leaf Clover and is available to purchase afterwards. Niko uses it during the Ballad of Gay Tony mission, Ladies Half Price, provided if players choose to go back to the ambush and kill him and Packie. NOOSE Officers will attack the player if they have a wanted level of three stars or higher.

Appearance on the Rockstar Games Social Club website.
Add a photo to this gallery 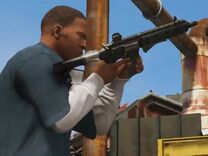 Franklin Clinton reloading the Carbine Rifle equipped with a grip.

Graphically improved Carbine Rifle in the next-gen re-release wielded by Franklin.
Add a photo to this gallery

It can be purchased from the back-alley gun shops for $5,000 and each additional magazine will cost $100. It can be purchased from Little Jacob for $3,500 with each additional magazine costing $70. The Carbine Rifle can also be acquired from NOOSE Tactical Response Unit Officers, FIB Agents and certain LCPD Officers, specifically those who guard places of high security such as The Statue of Happiness.

Retrieved from "https://gta.fandom.com/wiki/Carbine_Rifle?oldid=738677"
Community content is available under CC-BY-SA unless otherwise noted.