View source
watch 02:52
Roblox: DeepWoken - The Loop
Do you like this video?
Play Sound
This article is about the weapon. For the mission in Grand Theft Auto V, see Carbine Rifles.

“Combining long distance accuracy with a high capacity magazine, the Carbine Rifle can be relied on to make the hit.”

In each game, the Carbine Rifle is always been based on the M16/AR-15 or a variant of this weapon.

The Carbine Rifle is one of the weapons that had several changes in the Grand Theft Auto series, but retained its rather streamlined appearance compared to the AK-47. The weapon received the same black/dark grey skin, with several details of shades of the same colors. The 3D Universe renditions shared the characteristic carry handle-iron sight attachment (being mostly used on the M4 and other derivatives of the same), while the HD Universe rendition lacked such feature, but still maintaining the streamlined appearance.

Opposed to the AK-47 being mostly used by street gangs, the Carbine Rifle is a weapon of choice of many law enforcement agencies, the military, and high-level criminals, such as the Mafia, drug cartels, and heist crews.

In each game it appears, the Carbine Rifle is generally more powerful than the AK-47.

The weapon is based on multiple assault rifles of the same derivative, although most of them received a singular name, being most of the times incorrect in the historical sense.

Originally, the Grand Theft Auto Vice City version was modeled after the longer-barreled Colt Model 723, but with the front sight facing the correct direction. The beta model can still be used in the initial Playstation 2 version of the game, and can be seen in the intro cutscene of the game, as well as in cutscenes for Rub Out and Keep Your Friends Close... in all versions.

Additionally, in a cutscene of the mission Stowaway of Grand Theft Auto: San Andreas, a government agent is shown holding a Defender Mark 1 Assault Rifle from Manhunt, although the model is using a generic dirt texture.

Grand Theft Auto IV's rendition is modeled after an M4A1 carbine, titled 'Carbine Rifle' in-game. This version is accurate both in timeline and overall features, including magazine size and appearance. Interestingly, the carry handle has been replaced with an aftermarket drum sight. It also has "Property Of Liberty City Arms" stamped where the magazine release is normally found, probably a reference to the "Property Of U.S. Govt" stamped on real-life government-owned M4A1s in the United States.

“It's 'mission accomplished' every time with this versatile, hard hitting assault rifle. ...The choice of first line infantry operatives.”

Grand Theft Auto: Chinatown Wars's rendition is difficult to identify, but it is has a full stock and long barrel, and the triangular hand guard as seen on the HUD suggests it is based on the Colt M16A2. However, its overall shape resembles an Armalite AR-10. It has, much like in GTA: San Andreas, a 50-round magazine.

The Grand Theft Auto V/Grand Theft Auto Online rendition of the Carbine Rifle is based on a mishmash of different AR-15s, featuring almost identical parts (with regards to the lower receiver, especially the magazine well, and also the gas block) that were possibly influenced by the Remington R5 RGP, Honey Badger, SR-25 and Heckler & Koch HK416. The pistol grip seems to be a combination between both Ergo and Hogue grips. The trigger housing is similar to the Magpul Enhanced Trigger Guard. The upper receiver seems to be influenced by the VLTOR MUR-1 upper receiver, with a raised Picatinny rail, similar to the HK416. It also has dual mounted iron sights on the main Picatinny rail. There are also some influences from a Daniel Defense DDM4V7, notably the handguard, which is the Daniel Defense Modular Floating Rail (MFR) 9.0, and complete with an aftermarket buttstock.

In the Xbox One, PlayStation 4 and PC versions of the game, the Carbine Rifle's textures are much more detailed, having stampings and pins on the receiver that are not visible on the Xbox 360 and PlayStation 3 versions. It is manufactured by the Austrian company Vom Feuer, as seen inscribed in the updated model (which may be again an allusion to HK416 - being an American design produced by a company from a German-speaking country).

The Grand Theft Auto III version of the rifle differs from any other variant for how powerful it is: featuring an exceptionally high rate of fire and a 60-round magazine, it is most of the times a one-shot kill against any enemy, and can easily destroy most vehicles with a few bursts, making it arguably the most powerful firearm in the game. One might even compare it to the Minigun or the M60 seen in later games. Similarly to the Sniper Rifle and the Rocket Launcher, the rifle can be aimed in first person, resulting in a stationary view with the crosshair on the center of the screen. Due to its incredibly high fire rate, the M16 in GTA III suffers from wild and nearly uncontrollable recoil when being aimed in first person.

The M4 in Grand Theft Auto: Vice City is a much less powerful rifle than its GTA III predecessor, and despite still being a one-shot kill in many occasions (such as shooting at the head or the shoulder), it now features a slower rate of fire and a 30-round magazine. On the other hand, the recoil is also much lower this time around, making it useful for more precise shots. Like in GTA III, it can also be aimed in first person.

The Grand Theft Auto: San Andreas version has an even lower rate of fire, and also has considerably less power, now only being a one-shot kill weapon if aimed at the head. Even then, it is still highly effective, featuring a 50-round magazine and a smaller crosshair than that of the AK-47, making it useful for more precise and accurate shots. It is nearly recoilless compared to the AK-47 and has a 20 meter range advantage over it. The M4 is outranged only by the Country Rifle and the Sniper Rifle. It does not feature a first person aiming mode like its predecessors did, and neither do any of the following games have it.

In Grand Theft Auto IV, the performance of the Carbine Rifle is stellar. Accuracy and fire rate are both high, along with damage. It is highly effective in close to mid range, with accuracy dropping off at long range. Accuracy is even higher when crouched, allowing the player to fire it fully-automatically while being able to reliably hit targets. It has the longest range of any non-sniper weapon in the game. It is not as powerful as the Assault Rifle, but its precision and fire rate still make it nonetheless one of the best rifles in the game.

The Grand Theft Auto: Chinatown Wars version is incredibly powerful, being almost comparable to the one present in GTA III, with a few bursts being enough to easily kill an enemy and destroy a vehicle. Its fire rate is also exceptionally fast, being able to quickly empty its 50-round magazine.

In Grand Theft Auto V and Grand Theft Auto Online, the Carbine Rifle is superior and all-round to Submachine Guns, and is more accurate but less powerful than the Advanced Rifle, along with the quick rate of fire, which consumes the ammo quickly. Still, it is a very accurate weapon that can be relied on for any situation.

The Carbine Rifle is a bit more powerful than the Assault Rifle, as well as having a better fire rate, range and accuracy. Nevertheless, they both have the same range.

The weapon by default has a 30-round magazine, which can be replaced with a 60-round magazine. In Grand Theft Auto Online, as of the Further Adventures in Finance and Felony update, it can be further upgraded with a 100-round box magazine, which offers as much suppression fire as an MG with "Extended Clip" or a Combat MG with "Default Clip", at the cost of a slightly increased reload time.

F Free for players that have the Special/Collector's edition of the game.
* These Tints can also be unlocked by bringing the Carbine Rifle to any Weapon Workshop.

Colt Model 723 used in the PS2 version of Grand Theft Auto: Vice City, and in cutscenes of all versions of the game. The most notable differences are the longer barrel and the correctly modeled front sight and collapsible stock.

The Defender Mark 1 Assault Rifle from Manhunt as seen in the mission Stowaway in Grand Theft Auto: San Andreas, with a generic dirt texture instead of the original Manhunt texture. 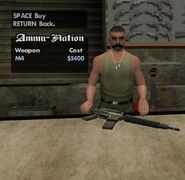 The Carbine Rifle at Ammu-Nation in GTA V.

Carl Johnson with an M4 in Grove Street. 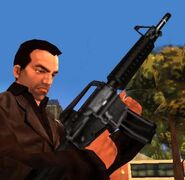 Franklin using the Carbine Rifle to steal a car. 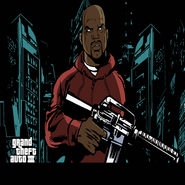 A gunner using an Assault Rifle in a Coastguard Maverick.

LCPD officers behind a Police Cruiser. Note the officer wielding an M16 rifle.

The M4-styled Carbine Rifle in the hands of Trevor Philips.

Michael holding a weapon resembling an M4 CQBR with a suppressor.

The M4-styled Carbine Rifle, again in the hands of Trevor. Michael holds an Assault Sniper, a beta weapon.

Michael with the suppressed M4. Note the different stock.

A character using a Carbine Rifle with a scope and a suppressor.