Standard White - 100%
“This is technically a pickup truck, in the same way that a machete could technically be used in self-defense. And if you so much as mention its six-wheel, machine-gun-toting big brother, the Caracara is going to defend itself all over your mangled corpse. You have been warned.”

The Vapid Caracara 4x4 is a four-door pick-up truck featured in Grand Theft Auto Online as part of The Diamond Casino & Resort update.

The Caracara 4x4 is heavily inspired by the Ford F-150, while the tail lights are very similar to those of the 2016–present Nissan Titan. Its bonnet is inspired from the Ram Pickup models.

The vehicle is essentially a shorter, unarmed version of the Caracara, where many of its features were retained from the 6x6 version, including the vented hood and the light strips over the grille. While its front bumper remains identical in shape to the one in the 6x6 version, it sports a smaller meshed vent, along with holes on the outer edge panels.

Color distribution is the same as the Caracara, where the primary color affects most of the bodywork, while the secondary color is applied to the grille elements and the vehicle's springs. It shares the same wheel model with the Guardian, being a paintable derivative of the ones seen in the Bodhi, though the centercap is also painted.

While the Caracara 4x4 can be fitted with roof lights, they are non-functional.

On tarmac roads, the Caracara 4x4 seems to have wavy handling due to its tight turning circle, thanks to its 4WD layout. Off-road, however, it feels planted and negates any chance of a spinout, and its heavy-duty suspension makes it beneficial in navigating through rough, uneven terrain. Its speed is good, though not enough to keep up with other faster Off-Road class vehicles. Its large tires make them a prime target for gunfire, so equipping it with bulletproof tires are a necessity if using it for combat.

The Caracara 4x4 has one (the eleventh) Advanced Flag enabled.[1] The purpose of this flag is unknown, but it appears to have little impact on performance.

Similar to the Caracara, the 4x4 model is powered by an inline-4 engine bearing throttle bodies. Contrary to the original Caracara, the 4x4 version has a higher revving engine that produces more power. As of the Los Santos Summer Special update, however, the engine sound has been changed that resembles the Guardian.

Installing any "Rack" modification will increase its traction slightly, in the same way as a spoiler. 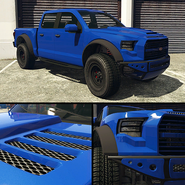 The Caracara 4x4 on the updated Rockstar Games Social Club.

The Caracara 4x4 in the cinematic preview on Rockstar Games Social Club.

Comparison with the Caracara. (Rear view) 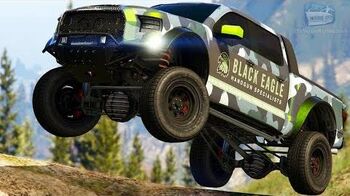