Standard White - 100%
“Your mom lied: size matters. And while we're at it, no one cares what you're like on the inside, money and power are the most important things in life, and naked, sociopathic aggression is demonstrably the best way to get ahead in everything you do. Now you've taken all that on board, your choice of vehicle has already been made. Welcome to the Caracara: time to hop in and spread the word.

Please note: This vehicle can be modified at a Vehicle Workshop inside an Avenger or Mobile Operation Center.

The Vapid Caracara is a 6x6 weaponized off-road pickup featured in Grand Theft Auto Online as part of the continuation of the Southern San Andreas Super Sport Series update, released on April 3rd, 2018, during the Target Assault Week event.[2]

The Caracara appears as a 6x6 truck heavily inspired by the Ford F-150, more specifically, the Hennessey VelociRaptor 6X6, a 6x6 alternative. The tail lights are very similar to those of the 2016–present Nissan Titan. Its bonnet is inspired from the Ram Pickup models.

The truck features a long body and a bulky profile, where the front end is largely dominated by an off-road bumper, consisting of tubular frames on the borders, vented sections on the center and triangle-shaped outer edge panels, along with a sump guard protecting the front axle. The upper area is mostly occupied by the mesh grille on the center with seven horizontal separations over it, the middle one being wider and bearing the manufacturer emblem on the center. The outer edges feature a set of dual rectangular headlights placed within C-shaped light units, while the area above the grille features modern light strips acting as the high-beam lights. The hood features a scoop/intake on the center and vented sections beside it.

On the sides, large black plastic fender arches are seen over the wheels, as well as black side steps similar to the "Slat Skirt" options seen in the Riata and the Kamacho. The cabin area makes use of black trims around the windshield and side windows, along with body-colored mirror shells and black door handles. The front door windows have small extensions on the lower front corners, intended to improve visibility towards the ground.

The rear of the truck features a long truck bed with plastic trim on the upper borders. The tail lights are a stretched version of the Riata's, and the tailgate shares the same detail as the aforementioned vehicle, only with a smaller handle and different upper border. A plastic bumper with a license plate on the center can be seen below. Similar to the Technical and its variants, the Caracara is equipped with a turret, which is mounted on a steel platform placed on the truck bed. The interior uses the same interior textures and dials as the Cavalcade and many other SUVs.

The vehicle's primary color affects most of the bodywork, while the secondary color is applied to the grille elements and the vehicle's springs. The wheels appear to be an off-road derivative of the "Rally Master" tuner wheels, wrapped in high-profile tires with knobby treads.

Similar to the Technical, the Technical Aqua and the Technical Custom, the vehicle is equipped with the same machine gun turret that resembles a DShK 12.7mm (.50 caliber) machine gun, but can be replaced with a six-barreled 7.62mm Minigun resembling a GAU-17/A gatling gun.

Overall, the vehicle handles, as expected from an off-road truck, best off-road, although it is very prone to being flung with the tiniest of bumps and collisions, and has a tendency to flip onto its slide, more so than the Dubsta 6x6. Its road performance is not overwhelming and certainly does not keep up with other turreted vehicles.

Durability-wise, the truck is generally resistant as an off-road truck thanks to its mass and relatively good speed, but is a poor choice on combat, as it is more of an improvised fighting vehicle. It can be destroyed in a single explosion and has no bullet-resistant windows.

The truck is powered by what appears to be an inline-4 engine sporting 4 throttle bodies. Positioned in a front engine, all wheel drive configuration, this is coupled up to a 5-speed gearbox powering all 6 wheels. The engine sound is shared with several SUVs in the game, including the Dubsta and the Dubsta 6x6.

The Caracara has all four advanced flags enabled[4]:

The Caracara has a rear turret for use by an independent gunner, having an excellent rotation angle of 360 degrees and elevation angle of between -15 and 45 degrees, providing impeccable defense against helicopters and pursuing cars. However, as a compromise for its power, the gunner is almost completely exposed and may fall off the vehicle in case of a crash, or become vulnerable to gunshots, which can kill the gunner. Players are able to access the mounted machine gun by holding the enter button.

It should be noted that because of the vehicle's poor durability, the player should avoid using the gun to explode targets close to the vehicle, as a single explosion will reduce the health to a critical level, if not instantly destroying the vehicle.

The Caracara can be modified at Los Santos Customs and other mod shops, although the weapons/liveries can only be accessed by a Vehicle Workshop inside a Mobile Operations Center or Avenger.

When purchased, the Caracara comes painted in the following colors by default:

A red Caracara in a Target Assault race, shown in the update's official artwork. 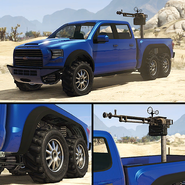 The Caracara on Warstock Cache & Carry.

The Caracara on the updated Rockstar Games Social Club.

The Caracara in the cinematic preview on Rockstar Games Social Club.

A Caracara with the 7.62mm Minigun upgrade. (Rear quarter view) 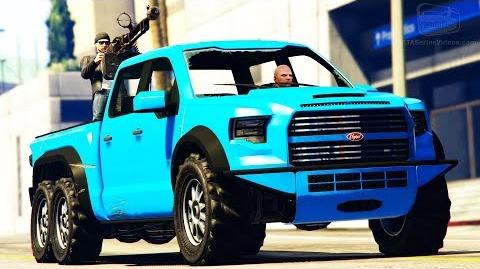