Satchel Charges
Thermite Bomb
Sticky Bombs
Proximity Mines
The Car Bomb is a weapon first featured in Grand Theft Auto and has appeared in most titles since then.

A Car Bomb, as implied, is an explosive device placed in a vehicle to be detonated. They differentiate as the games develop, but their general use hasn't changed ever since.

Although not physically seen, car bombs were primarily an extra weapon that can be purchased through bomb shops and are installed into the vehicle. There's only one type of car bomb available: time-delayed. When the player arms the bomb, the timer ticks for a few seconds before the bomb detonates.

In Grand Theft Auto, some parked cars in Vice City (like the F-19 and the Panther for example) are rigged with explosives, and will detonate after 5 seconds, with a warning message such as "This car is about to explode. Please make peace with whatever gods you may worship!".

Again not physically seen, car bombs were primarily an extra weapon that can be purchased through bomb shops and are installed into the vehicle.

There are three types of car bombs:

When a car bomb explodes in the 3D Universe games, the wanted level is not awarded or revived. However there can be several exceptions.

Car Bombs are reintroduced in Grand Theft Auto IV, this time as four explosive (possibly C-4) blocks with a phone attached to it via improvised wiring. Car bombs are first encountered in the Gerald McReary mission Actions Speak Louder than Words, where they are used to destroy a fuel depot by attaching it into the targets' Cognoscenti. The bombs are remote detonated through calling Packie on the cell phone and selecting Detonate. Using it will not award a wanted level, being a useful weapon for destroying Securicars.

The Car Bomb did not reappear in Episodes from Liberty City, although in The Ballad of Gay Tony, Sticky Bombs might be a convenient replacement (though they will self-detonate after a minute and 30 seconds).

Car Bombs appears in Grand Theft Auto: Chinatown Wars as a single explosive with a timed detonator on it. They are introduced in the mission Operation Northwood.

After acquiring the bomb through a garage and upon entry, the touch screen will show a picture of the car's engine, which the player then must place the bomb onto and wire it up. Once placed in the car, the detonator symbol will appear in the PDA. This can be activated at any time, both in-vehicle and out, and will instantly destroy the car and any others or pedestrians surrounding it.

The Car Bomb is reintroduced in Grand Theft Auto Online as an optional installment for the vehicle. The player can use two types of car bombs: 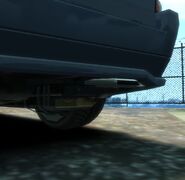 Niko putting a Car Bomb in a Cognoscenti.