"Come on, Tommy, drive for me again! Take my boys over there, and then we'll take these Haitians down! They mess with me, they mess with the biggest boy in town!"
― Umberto Robina

Cannon Fodder is a mission in Grand Theft Auto: Vice City given to protagonist Tommy Vercetti by Cubans leader Umberto Robina from his fathers café in Little Havana, Vice City.

Tommy Vercetti goes to Café Robina and meets Umberto Robina, who has started an open gang war with the Haitians, sending his men to attack their drug factory in Little Haiti. The factory, however, is proving impregnable and so Umberto sends Vercetti to drive some new Cuban gangsters to the scene and help the steal the Haitian's van loaded with a drugs shipment. Vercetti leaves the café and finds a four-door vehicle and returns to collect three Cubans before driving to The Well Stacked Pizza Co. store opposite an alleyway leading to the factory, dropping off the Cubans and meeting Rico. Vercetti kills a number of Haitians guarding the entrance and, after they are dead, some Cubans run down the alleyway and into the factory walls, but are killed by a sniper. Vercetti, now joined by three more Cubans, kills the sniper and enters the factory walls, killing all the Haitians he meets. Vercetti and Rico then get into the Haitian van and drive it back to the café.

The reward for completing this mission is $2000 and the mission Naval Engagement is unlocked.

Tommy and the Cubans storming the factory.

The Cubans preparing to steal the Haitian drugs-laden van, with a number of Haitians about to attack
Add a photo to this gallery 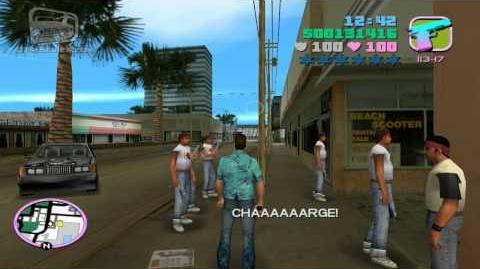 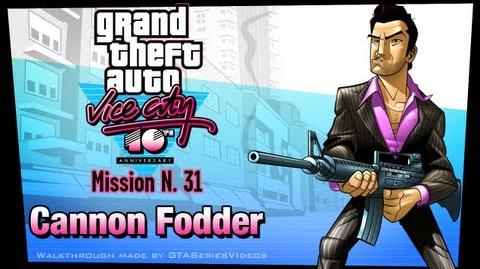 Retrieved from "https://gta.fandom.com/wiki/Cannon_Fodder?oldid=841621"
Community content is available under CC-BY-SA unless otherwise noted.