Jeep
Canis is an American automobile manufacturer in the HD Universe of the Grand Theft Auto series.

Canis is parody of American car manufacturer Jeep, but there is one vehicle that is not based on any Jeep model, which is the Kalahari. Instead, it is based on Citröen design. The company has a full line up of SUVs, off road vehicles, and pickup trucks from yesteryear. The name, Canis, is most likely a reference to the constellation Canis Major and the genus of dog family. The brands name may also be a reference to the red hypergiant VY Canis Majoris, which is one of the largest stars in the known universe. The proof of theory behind Canis is the brand's logo, which appears to be a compass rose.

This would be a reference to Jeep's etymology, which comes from Eugene the Jeep, a character from the Popeye comic strip who was occasionally described as a 'magical dog'. 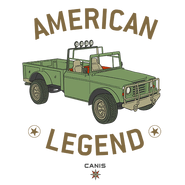 The graphic on the Canis American Legend Tee in Grand Theft Auto Online, featuring a Bodhi.

The graphic on the Canis USA Tee in Grand Theft Auto Online, featuring a Bodhi. 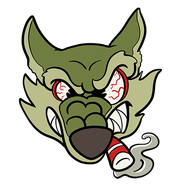 The graphic on the Canis Wolf Tee in Grand Theft Auto Online.