The Cane is a melee weapon in Grand Theft Auto: San Andreas, although it appeared in a few games as a mere object for certain characters.

The Cane, as the name implies is a long cane with a brown color. When selected as a weapon, the character may wield the cane as with a Katana.

Although specifically listed as a gift by the game's files (occupying the Other slot along with weapons such as the Flowers), the cane cannot be given to anyone, and cannot be used as anything more than an accessory or a weapon.

The Cane is not very strong compared to other Club-based weapons, although it seems to be the strongest among gifts. 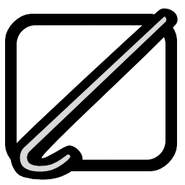 HUD icon of the Cane.

A Cane spawn in Las Venturas.

Some characters in other games may be seen using a cane, though it is not available as a weapon:

The cane is the most common melee weapon found in GTA San Andreas, with as many as 17 spawning locations.