The Camper is evidently designed as a large 1960s van based on the Volkswagen Type 2 T1 in the 2D and the 3D Universe. The GTA London rendition is depicted with a design proportionate to the Volkswagen Type 2, comes with only one color scheme (orange with a white top) and with a front-mounted spare tire.

The Grand Theft Auto: San Andreas rendition of the Camper features a narrower body and lower ground clearance than its predecessor, and sports more variety in the kinds of accessories featured. It is almost identical to the real-life Volkswagen in front but is longer and with a more modern look in the back half and the wheels; it may be found in a variety of two-tone or three-tone color schemes. The San Andreas' Camper has no front license plate, only the rear one is present, and is a mirror-view (reverse) from the frontal one, even when the front license is not present.

Like most vans in GTA San Andreas, it cannot be modified at any car shop. It can only be resprayed, and if a Camper has the peace sign in front, it will stay after respray. Sometimes, the Camper will spawn with a pop-top on the roof.

The Camper reappears in Grand Theft Auto V with a much larger appearance than the previous renditions, acquiring the form of a recreational vehicle, specifically a Class-C motorhome, and essentially replaces the role its counterpart, the Journey, had in the 3D Universe. Given it shares the main cab with the 1st generation Burrito, the Camper is obviously based on a 1996-2002 Chevrolet Express, with the large compartment that starts in a V-shape over the main cab and ends with a flat rear end with a large rack on the back.

The Camper always spawns in white with blue, light blue and yellow/gold stripes with "Camper by Brute" text on it. The Camper also has unknown window tint applied to its rear windows as default.[1] Although it is heavily considered as the successor of the Journey, the Camper only takes the role of a Class C motorhome, since the Journey returns as a Class A motorhome, but the Camper is newer and cleaner than the Journey in the game.

In comparison to its predecessor, the Love Wagon, the Camper's performance in GTA London is slightly more acceptable with a moderately good top speed, slightly below average acceleration and handling, average weight. While valued as £400 in mint condition, the van cannot be exported as it is "too big".

Like the Volkswagen Type 2, the Camper in GTA San Andreas runs on a small flat-4 cylinder engine. Acceleration and speed are among the worst in the game, as are handling and braking, which are also inferior with poor hill climbing capabilities but match the vehicle well due to the weak engine and bulky chassis. Also, despite its size and resemblance to a Volkswagen van, the Camper is capable of carrying only 3 people, including the driver; where one passenger sits in the bed while the other sits on the seat. It is probably the only vehicle that can only carry two other people.

The Camper's performance is expected for a recreational vehicle of this size. While the vehicle can achieve good speeds, acceleration is below average due to its large compartment and the front wheel drivetrain. Its handling is average, roughly similar to that of the Ambulance.

The Camper is powered by a turbocharged Inline-4 mounted transversely, coupled to a 4-speed gearbox in a front engine, front wheel drive layout. Like the Ambulance, the badges indicates it has a 4.5L turbo-diesel engine. 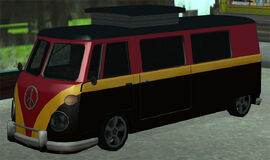 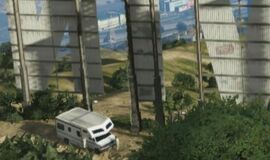 A Camper by the Vinewood Sign in GTA V.

The Camper on the Rockstar Games Social Club.

"The engine block is held together with a macramé hammock and that it runs on 15-year-old cooking oil."
―The Truth telling Carl Johnson about his mothership.

The Mothership is a variant of the Camper in GTA San Andreas owned by the weed-growing hippie The Truth. The only difference between the Mothership and the Camper vans is the unique psychedelic hippie paint job. When it is first introduced in the mission "Are You Going to San Fierro?", The Truth mentions that the engine block is held together with a macramé hammock and that it runs on 15-year-old cooking oil. He also claims that he purchased the vehicle in 1967. The Mothership's number plate reads "EREHTTUO" which is simply the phrase out there written backwards (a clear double pun from the saying "The Truth is Out There"), but as mentioned above, this "backwards" license effect is present in every Camper.

The Mothership appears only during the missions "Are You Going to San Fierro?", "Black Project", and "Riot", otherwise it is not found anywhere else in the game. In addition, the van does not have its own index number and internal name, making the Mothership difficult to obtain using conventional trainers. Garages are also notorious for not saving paint jobs so there is a chance of losing the paint job if saved in a garage.

It is possible to steal a full immune Mothership during the mission "Black Project", see here. 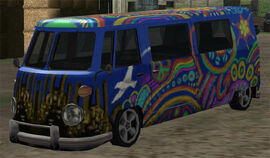 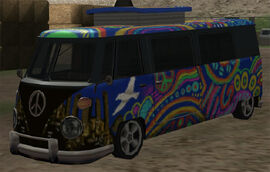 A "pop-top" Mothership with an additional black paintjob. Red may also substitute the black.

A unique GTA San Andreas Camper with khaki brown paintwork is obtainable during the mission "Jizzy". The van is made available when the player is required to rush to the bottom of a highway intersection near Foster Valley to rescue one of Jizzy B's prostitutes from two abusive clients. The van, parked close to all three individuals, can easily be taken and stored in a garage, to which point the player may either choose to complete the mission or fail it.

Unlike the Mothership, the khaki brown Camper will retain its body color as it doesn't utilize texture-based paint jobs. The combination of colors on the van may vary between each attempt in the mission, including a red-brown-black design or a brown-white design, but generally adopts brown in all its combinations.

Of interesting note is that the van's lights will remain on during the mission as long as the player doesn't store it in the garage, regardless of time and weather.

The Camper is not as common as other vehicles that spawn on the streets, although it has some spawning points across San Andreas:


Cite error: <ref> tags exist, but no <references/> tag was found
Retrieved from "https://gta.fandom.com/wiki/Camper?oldid=1201132"
Community content is available under CC-BY-SA unless otherwise noted.