Peds that uses it

Wikipedia has an article on:
Camera

The Camera is a device used to capture images, either as still photographs or as sequences of moving images (film or video).

During the final cutscene of The Green Sabre, when C.R.A.S.H. drops CJ off in Whetstone, the camera Officer Pulaski gives to CJ is a different model to the one in GTA San Andreas. It is white with a detachable flash, and the lens is wider, yet shorter and more detailed than the in-game model.

GTA Vice City was the first game to feature an interactive camera, although the player could only use it in one mission and will be unable to use afterward without the use of mods or trainers. The player can zoom in and out using the camera, similar to sniper rifles and their controls. Tourists are seen with cameras, even though when the player kills them, they cannot pick up the camera.

The device is also available in GTA San Andreas, albeit with more functionality, allowing Carl to use it freely. It can be used in San Fierro to collect snapshots, which are required to achieve 100% completion. The camera has a capacity of 36 pictures per film, and pictures taken can be saved. If the player recruits a gang member, the player can give the camera to him by walking up to him and following the prompt. After that, the game is viewed through the perspective of the gang member and pictures of CJ can be taken. The player can also aim the camera at a girlfriend or a Grove Street gang member and CJ will say unique dialogues related to photo-shooting. Girlfriends and recruited gang members will wave to the camera.

In Grand Theft Auto IV, the Camera no longer appears as an usable item, but is replaced by a similar one, integrated into the mobile phone.

Niko Bellic's phone is equipped with a Whiz camera phone during the mission "Photo Shoot". The camera is used in certain missions where a picture is required. Outside of missions, snapshots can be taken, but there is no way of saving them. Accessing the camera function of the phone when in a Subway Car or Cable Car allows for first-person view inside these vehicles (something missing in the standard views). In a player-controlled vehicle; however, the car will stop immediately when the camera is selected, no matter what speed (this glitch was fixed in the PC version). In Episodes from Liberty City, a camera phone option is available from the start of the game, and can be used to provide a first-person perspective at any time Johnny Klebitz or Luis Fernando Lopez are on foot.

In some tourist spot like Firefly Projects, some pedestrians are seen using the camera. When they drop the camera, the player can pick it, but are still unable to use it (instead the player can throw it like other objects). In The Ballad Of Gay Tony, in the first club management mission at Maisonette 9, where Luis have to save Clay Jackson from paparazzi, the paparazzi are using cameras with a different design to that of GTA IV (obviously long-range lens). Although they cannot be used by the player, they can be picked up and thrown like other objects.

The object itself appears to have a distinguished shaping reminiscent of models like the Olimpus E-3 or the Leica S2. The one used by the paparazzi is a tweaked variation with larger bottom, larger lens and attached flash.

In Grand Theft Auto V, the regular SLR camera model is used by few NPCs, notably Beverly Felton in the "Paparazzo" Strangers and Freaks mission series. Franklin actually gets to use the item once, during the mission Paparazzo - The Sex Tape. For the remainder of the game, the camera is replaced by the Snapmatic app on smartphone.

In the mission Casing the Jewel Store, Lester gives Michael a pair of glasses fitted with a camera, to study Vangelico's vents and security systems, which cannot be used outside of missions.

Beta model and cutscene model of the camera

Beta model of the camera seen in the mission The Green Sabre. 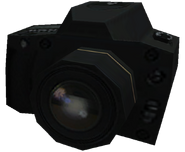 A camera in The Ballad of Gay Tony. Note it is just the GTA IV iteration with a few changes.

The Camera appears as an item solely for surveillance and notable evidences in some missions.