"Beats losing my ass in a cell!"
―Cam Jones

Cam resides in Vice City and runs his own business, Cam's Can Openers. Cam is a kleptomaniac safecracker who has been arrested by the Vice City Police Department after he was spotted running down the street with a safe he could not open. Cam was awaiting trial for attempted robbery, which would see him sentenced to ten years in jail.

Tommy Vercetti frees him from the VCPD headquarters to perform a heist on a bank, needing Cam as a bomb setter and a safe pick.

Cam, along with Tommy, Hilary King and Phil Cassidy pull off the heist but the fate of Cam is left up to the player. The player can choose to let Cam die during the bank heist or can help save Cam and Phil. The player can also leave Cam behind without killing him. If Cam dies, the game script indicates that Tommy and Phil get a bigger profit from the heist, although the amount the player receives for completing the mission does not change. 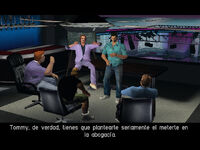 Cam with Phil, Hilary, Tommy and Ken preparing for the heist.

Cam with Phil and Tommy during the mission The Job. 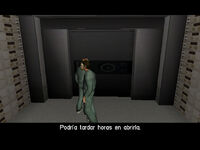 Cam opening the safe.
Add a photo to this gallery
Retrieved from "https://gta.fandom.com/wiki/Cam_Jones?oldid=1188886"
Community content is available under CC-BY-SA unless otherwise noted.