The Karin Calico GTF is a 3-door sports liftback featured in Grand Theft Auto Online as part of the Los Santos Tuners update.

The design of the car is relatively simple and rounded, where the front end is predominated by a wide mesh intake with black dividers on it, as well as smaller intakes beside it and the central number plate on the centre partially covering the central intake. The upper area consist of a small grille on the centre and four circular headlamps, while the bonnet area features two protruding shapes for the inner lamps and dual intakes. The sides of the car are rather basic, denoted by the flat shapes on the wheel arches and the body lines conforming the skirting area, as well as small marker lamps on the front fenders and the painted door handles. The greenhouse area is simplistic in appearance and features black trim around the windows, black inner separations and coloured mirror shells. A small aerial can be seen on the left. The rear section of the car consist of a small boot with a spoiler, a dedicated section for the number plate and silver badges above, with the manufacturer name on the left, "CALICO" and "2.0 TURBO" on the right and the emblem on the centre. The outer sides have large rounded tail lamps with black trim around, while a single exhaust tube can be seen on the passenger side, just below the bumper.

The interior of the car shares the same dial set and features as cars like the Coquette, the Serrano and the Habanero, albeit featuring the Karin logo on the horn cap. The interior itself is a white/paintable variation of the one used on the aforementioned cars.

The vehicle is painted with a primary colour on the bodywork, while the secondary one seems to be only applied on secondary-coloured options selected in mod shops. A trim colour is also available for the interior, as well as a dial colour. It uses a set of six-spoke rims with five bolts around the centre, wrapped with low-profile tyres. These rims can also support a dedicated colour, although only examples generated in Content Creator may have one.

The Calico GTF shares very similar characteristics to the Sultan Classic, having phenomenal top speed and acceleration. The AWD drivetrain allows the car to rocket off the starting line and hard charge to its top speed with no issue at all, making it one of the fastest and quickest cars of its class. When fully upgraded, the Calico GTF is able to keep up with most supercars in terms of both straight-line and handling capabilities. Whilst braking, the car has good stopping distance, but braking whilst turning simultaneously is not the car's strongest point, albeit still manageable. In rain and wet surfaces, the car is very stable despite the low grip conditions, which makes it a top choice for wet races.

The car also has good handling and traction, again due to its AWD drivetrain, which allows the car to enter corners with little understeer and high stability, but the car can compromise the understeer effect by having to marginally slow down mid-corner and fully throttling the car out the turn exit, and it doesn't handle drifting very well due to its AWD nature (assuming the player has not fitted it with low grip tyres). In addition, it will start to go wide if the accelerator is not let off whilst navigating a tight turn. Off-road, the Calico GTF is only capable of average performance, able to maintain its high speed on looser surfaces and steep inclines. As the car's handling line suggests (not featuring the same flags as other off-road capable vehicles), cornering ability off-road is relatively weak. The ground clearance of the car allows it to sort out most small obstacles with ease. The car also has good deformation rate compared to most vehicles, but the engine will be severely affected after a few hard collisions.

Overall, the Calico GTF is a brilliant car with substantial characteristics and also made to be an excellent getaway vehicle, but only for the driver and one passenger that can be seated next to the driver. The car is a brilliant all-rounder on-road and perfect for cruising around the map on most uneven surfaces. However, care should be taken when driving over bumps when airborne; the Calico can get rather unpredictable and can struggle with keeping a straight line if it lands incorrectly. And like all other, specific vehicles for Pursuit Series, bulletproof tyres are strongly recommended as to prevent the tyres from potentially being shot.

The Calico GTF is powered by an Inline-6 engine with a single pod filter on the inlet manifold, with the badges stating to be a 2.0L Turbocharged engine. It has a 5-speed gearbox and an AWD layout (48% front, 52% rear). It shares the grumbling engine sound from the Sultan RS and Sultan Classic.

Front end seen in the background of the Jester RR screenshot. 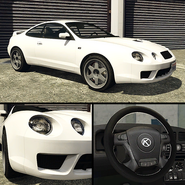 The Calico GTF in the cinematic preview on Rockstar Games Social Club.

Calico-themed mural art, can be seen inside the Auto Shop if applied the "Super Chibi" style.

Garage banner featuring the badge for the Calico, can also be seen inside the Auto Shop if applied the said style.