caddy
caddy2
“There are probably several excellent reasons why a modified golf caddy is the time-honored choice for getting around in your subterranean lair.”

“Golf cart for people too lazy to walk. Through to be in slow motion drivebys.”

The vehicle is distinguished by the small body and open cabin, featuring a small black rectangle-shaped bumper, rectangle headlights and square tail lights, along with a mounted windshield and no doors.

The Caddy may spawn with an assortment of bags on the back and is available in a variety of single colors. Entering a Caddy automatically equips the player with a Golf Club as a melee weapon, providing the melee slot is not already occupied.

In The Ballad of Gay Tony, the Caddy strongly resembles a Club Car Precedent, although the frontage is more square-shaped.

The vehicle retains its appearance and purpose from the 3D Universe iterations, but is devoid of any form of light sources. The cabin area seems to be slightly more detailed, featuring ball holders on the dashboard, armrest on the seats and bag holders on the back (although no extra components on the back exists).

The vehicle is set to spawn in a glossy white color with a ProLaps marking on the front. The wheel rims are scaled down versions of the ones seen on the Fortune.

The Caddy makes a return in Grand Theft Auto V and Grand Theft Auto Online, assuming the same design as the TBOGT rendition. However, it has a cleaner appearance and sports updated "ProLaps" logos on the front and sides. The armrest on the seats are absent.

The vehicle's ball holders on the dashboard are seen with golf balls on it, and two Junk Energy Drink bottles can be seen on the seats' side bags. When playing Golf, the Caddy provided during the activity may have two bags loaded on the back of the vehicle.

The vehicle may spawn in either green, blue or grey single colors, while the original black details appear to have a light grey texturing. It retains the same wheel design.

Exclusive to Grand Theft Auto V and Grand Theft Auto Online, there is a civilian version of the Caddy which is seemingly identical to older models of the E-Z-GO Marathon, with minor influences from a Club Car DS for the rear section.

The civilian version is distinctive by the older design, featuring a set of circular headlights mounted next to the front wheels and a "K102" plaque on the hood, along with a small rear bed. A rusted trim can be seen around the dashboard area, on the steering column support, in front of the main seats and on the sides, as well as a sloped passenger foot rest, speakers below the seats and smaller armrests. All civilian Caddys seem to have unique custom plates reading "STATE GAMBLER ALL OR NOTHING".

The vehicle may spawn with or without a roof, which may detach from the rest of the vehicle after a hard collision. It may spawn in a fewer variety of single colors. The wheels appear to use plain steel rims also found on some industrial vehicles, as well as aircraft.

Exclusive to Grand Theft Auto Online as of the Gunrunning update, players may be able to choose a third variation of the Caddy for their Bunkers in the "Transportation" option, dubbed "Caddy 2". This version appears as a ride-on vehicle similar in design to the normal Caddy in terms of size, taking the appearance of a conventional electric platform truck (also called "warehouse utility vehicles"), inspired by vehicles like the E-Z-GO Industrial or the Taylor-Dunn burden carriers.

Rather than the Caddy's long wheelbase and tall cabin, the bunker Caddy has shorter wheelbase compared to length, and a short, roof-less cabin. The overall appearance is shared with that of the civilian Caddy, with a rusted paintjob and identical details on the cabin area (including the sloped foot rest for the passenger), accompanied with a fire extinguisher in front of it. The front end features a large defense framing with two headlamps mounted on it and a rear defense with two tail lights over it, with the passenger-side tail light having a single reverse light. Behind the cabin is the platform intended for carrying objects and, unlike the Caddy, features a small dashboard cluster.

There are three variations of the vehicle: one with an empty bed, one with a few equipments near the seats and another with several equipments occuping the whole section, either covered with a canvas or uncovered. The equipments one can see are Jerry Cans, ammo crates and a single HMG ammo box, which is the same as the ammo boxes on the Anti-Aircraft Trailer (MG option). The vehicle is only seen in a grey color (only changeable in Content Creator), and shares the same wheel design as the civilian version. 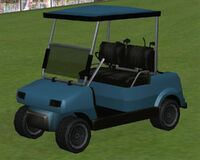 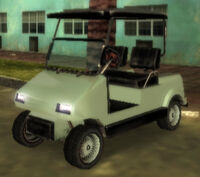 The Caddy is very light but very slow, and has a high center of gravity, causing it to take damage quickly, bounce around more violently and roll easily; as such, caution must be exercised when driving along a roadway where vehicles travel in high speeds. While the Caddy's bottom-heavy weight distribution means that it is less likely to rest upside down after a roll, the Caddy may end up resting on its back, immobilizing it.

Since it has no doors, the player is particularly vulnerable when having a wanted level, as the player will be instantaneously pulled out by a police officer and arrested if the Caddy is travelling in low speeds. Its light weight and slow speed also makes it susceptible to any police car.

The Caddy appears to be powered by an electric battery, as sparks will come out of the vehicle when damaged, similar to the Baggage Handler. The vehicle also has a single gear and an AWD layout.

The Caddy is the slowest car in the game, with a top speed of 21 mph. It also takes less damage, and is very easy to cripple, However, it possesses more heightened suspensions and good hill climbing power, thanks to its weak but effective RWD drivetrain.

Like the Airtug, the Caddy sports an engine that barely makes a sound, which can only be heard when driving in quiet areas and with radio turned off. Said engine, although supposed to be located in the rear section of the vehicle (considering the large room for said component), it is actually placed on the front end, as fumes will come from the front if the Caddy is damaged.

The Caddy has a small electric engine which powers it up to basic speeds. It has decent acceleration, but a very low top speed. The Caddy is not meant to travel at high speeds, and as such, it is particularly unpredictable, seemingly alternating between understeer or oversteer. The small wheelbase gives it a very tight cornering radius at low speeds though. Crash deformation is unsurprisingly poor, taking as few as one hits to be completely disabled. The Caddy's low weight means it is knocked off the road by almost any other cars, especially large ones such as the Sandking, Dubsta 6x6, or Insurgent. Caged variant of the TBOGT Caddy featured in "Practice Swing". 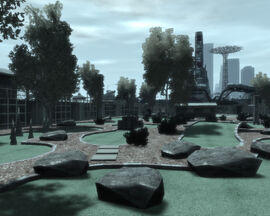 One spawn point for the Caddy in TBoGT is the minigolf course in Firefly Island. 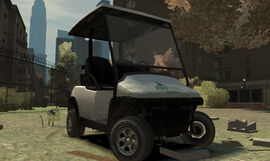 Beta Caddy in the first GTA V trailer. Note the armrest, which is absent in GTA V.

The rear of the Caddy in GTA V.

The Golfer Caddy on the updated Rockstar Games Social Club.

The Golfer Caddy in the cinematic preview on Rockstar Games Social Club.

The Civilian Caddy on the updated Rockstar Games Social Club.

The Civilian Caddy in the cinematic preview on Rockstar Games Social Club.

The bunker variant of the Caddy behind Agent 14.

Multiple Caddies lined up in a Bunker.

The Bunker Caddy on the updated Rockstar Games Social Club.

The Bunker Caddy in the cinematic preview on Rockstar Games Social Club. 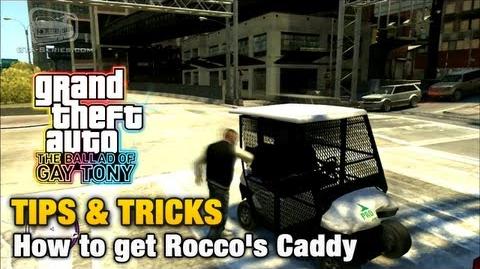