In Grand Theft Auto IV, the Cablecar appears to be based on the Roosevelt Island Tramway between Manhattan and Roosevelt Island in New York City. As such, the tram cars, stations, and cable pylons share a likeness with the real-life rendition.

The cabin/capsule of the Cablecar is large and wide in profile with rather angular shapes on both ends, featuring sliding doors for access and windows all around. The interior of the cabin/capsule features square lights for illumination and seats on each "quarter", as well as grab handles and poles around. On top, there is the large dual-beam support with a tilting pulley system attached to the end, which adjusts to the suspended cable of the tram-line.

The Cablecar only spawns in a garnet red, and falls under the management of the Liberty City Transport Authority (LTA). It is also dubbed "The Pigeon", similar to "The Fox" nickname stamped onto GTA IV's buses. It is also dubbed "Skycar" as seen on the large entrance signs.

The Cable car capsule itself is a plain rectangular steel structure with self-opening sliding doors on each long side. There are windows all around with the corners being pillarless to allow for uninterrupted viewing. A single lamp is present at the top of each end, though they do not work during night time. On top, there is a bare tube frame with diagonal reinforcing and a smaller tilting pulley system attached to the end, again adjusting to the suspended cable of the tram-line.

The Cable Car is seen in a white/gray and light blue color with a rather worn texture, and operates as part of the Pala Springs Aerial Tramway system.

Niko, Johnny and Luis can take a ride on the Cablecar, though the player cannot look around or move the protagonist whilst they are inside. First person view can be accessed via the camera on the protagonists' cell phone. NPCs are not programmed to use the Skycar, and the protagonist cannot grab hold of the Skycar whilst it is in motion.

The Cablecar is shown to have similar traits and behaviour with the Subway Car, and thus, the player cannot destroy it or even interfere with its path. Technically being a vehicle, it has its own handling line.

The vehicle operates similarly to the trams in Los Santos. The player is able to enter the cable car at any time; however, they need to pay a $10 fare. The player can enter the vehicle and walk around the capsule while it is parked in the terminal without paying a fare, but it won't leave the terminal while a player is inside unless the fare has been paid. Bicycles and motorcycles can also be taken on the tram by parking them inside before paying the fare. Pedestrians can be found inside the terminal building apparently waiting for trams but will not enter and ride.

Like its previous rendition, the Cable Car is shown with similar behaviour to the Freight Train and the Tram, and technically being a vehicle, it has its own handling line also shared with the aforementioned Freight Train. However, the Aerial Tramway can be destroyed using any explosive weapon, such as the Rocket Launcher. 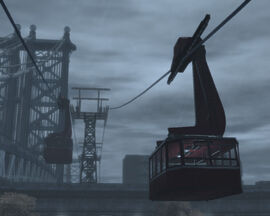 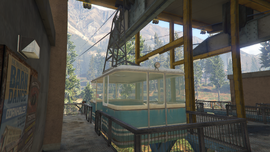 A Cable Car on the terminal, with its doors open. 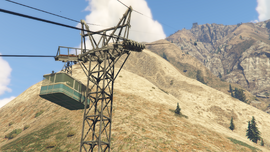 A Cable Car in transit, ascending towards Mount Chiliad. 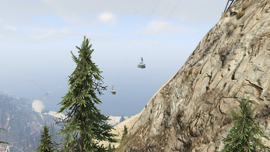 Two Cable Cars in transit, seen from a distance.