The Schyster Cabby is a four-door minivan-based taxicab in Grand Theft Auto IV and its episodes.

The Cabby is a derivative of the Vapid Minivan operated by L.C.C. Taxis, thus resembling a fourth generation Dodge Caravan or Chrysler Voyager. In reality, New York City Taxi rarely use the Caravan or Voyager as a minivan taxi; usually preferring to use the Honda Odyssey (represented in-game as the Dinka Perennial).

The Cabby differs from the other two Taxis by lacking roof-mounted advertisements, featuring only roof-mounted taxi signs, and the presence or absence of stickers, scuff bars, and black trimming above the sideskirts. The Cabby also features red medallions screwed on the front grille and rear end, and a wheelchair accessibility ramp at the rear bumper; however, it is non-functional. Cabbys can spawn with or without stepsides.

The Cabby is seen with a yellow primary color for most of the bodywork, as well as either yellow or black secondary colors for the lower portions of the sides. Unlike its civilian counterpart, which features five-spoke alloy rims, the Cabby is fitted with hubcaps that appear to be similar to the ones from the Vauxhall Corsa C.

Players can enter Cabby's and take taxi rides to destinations.

The Cabby performs differently from the Minivan, as, while it has slow acceleration and a poor top speed, it makes up for the suspension, which has been slightly upgraded to cope with Algonquin's rough roads, and, accordingly, handles much better than the Minivan. The brakes have also had a slight upgrade, giving the Cabby a shorter stopping distance. Accident deformation and engine build quality are sub-standard, as a direct collision can cause the engine and driver to be set alight.

The car is powered by, what the engine cover suggests, a V8, like its civilian version. However, it is coupled to a 5-speed gearbox in a front engine, rear wheel drive layout. The engine sound is the same as the civilian version and the station wagons of the same game (Stratum, Solair and Ingot).

A Cabby with side steps and an all-yellow color set in Grand Theft Auto IV. (Rear quarter view) 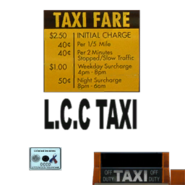