Conglomerated National Television (CNT) is a television network in the HD Universe.

The company began broadcasting in 1974. Their headquarters is located in Los Santos, at the corner of Clinton Avenue and Elgin Avenue in Vinewood Hills, San Andreas.

The player can buy stocks from them on the Bawsaq.com website in GTA V.

The network's name is based on on U.S. TV networks CNN and TNT, whilst its logo resembles that of AMC.

The network itself appears to be mostly based on The CW, as well as Turner's various broadcasting assets, such as the aforementioned CNN and TNT, as well as TBS. 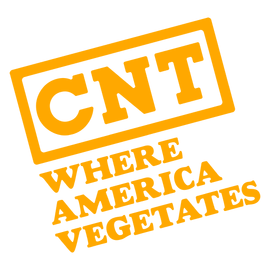 The graphic of the CNT Tee in Grand Theft Auto Online.