By Land, Sea and Air

By Land, Sea and Air

In-game time
“Merryweather's ramping up of domestic operations does have a silver lining - a sudden influx of state-of-the-art military aircraft. They have two armed helicopters in storage on the Pier 400 rooftop at the west docks that would serve me very well on another job. Deliver them to the warehouse and I'll make sure you're looked after. Those psychos are tooled up so watch yourself”
— Description

By Land, Sea and Air is a mission in Grand Theft Auto Online given to the player by Lester Crest. It is available for up to 4 players.

The Merryweather Security soldiers are possessing two powerful Buzzards at the top of the Pier 400 where they keep aircraft. Lester is in need of those two choppers, and orders the team to get them. First of all, the team will need a helicopter to land in the southern part from the airbase. Several soldiers will be protecting it. The team needs to eliminate them all and steal the two helicopters. Three Merryweather helicopters will chase the team, they can be easily eliminated by aiming at them and firing rockets. Once the team is out of danger, they need to deliver the two helicopters at Lester's warehouse in Murrieta Heights.

“What you lack in social skills, you make up for in real skills. Gr8. Thx”
— Lester's text 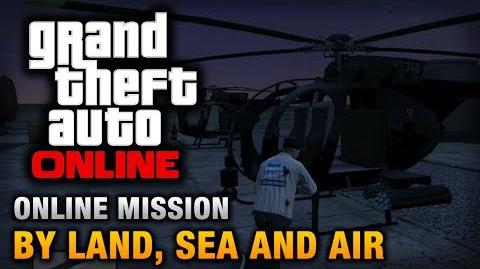