• ­Only Fire One Shot Per Trigger Press
• ­Vehicle

"The Buzzard is a light, compact helicopter for military or millionaire use. With a 5-bladed main rotor and a top speed of 175mph, it's widely considered to be the best performing helicopter in its class. These hardly ever drop out of the sky like a stone. Helicopters are one of the safest ways to travel."
―Warstock Cache & Carry description.

Similarly armed with miniguns as the Annihilator, as well as additionally featuring rocket pods, the Buzzard is evidently an AH-6, an attack variant of the MH-6 Little Bird light observation helicopter, which in turn is a military version of the OH-6 Cayuse and the MD 500C. The Buzzard also features a FLIR (Forward looking infrared) pod under the cabin, similar to the real life AH/MH6M Little Bird variant. It is important to note that the Buzzard has the old-style tail stabilizer, characteristic of the MD-500C and its corresponding defender AH/MH-6 counterparts.

According to in-game speech, the Buzzard that Luis Fernando Lopez intended to steal for Yusuf Amir was a prototype, meaning there is possibly only a single one in existence. The same stolen one was later repainted gold, by Yusuf - this difference would be first recognized during the mission, "Not So Fast", where Luis must use it to land on the roof of the Libertonian. LCPD will call it a "black/gold helicopter", depending on which version Luis uses - the black Buzzard acquired by a cheat code or the gold Buzzard from Yusuf at the end of the game.

Returning in Grand Theft Auto V, it retains the original design, only now featuring different badges, and is now classed as a legal vehicle, no longer being a prototype. 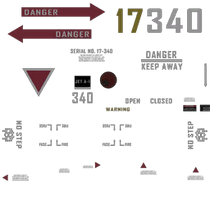 Designed as a light exploration/attack helicopter, the Buzzard has an excellent maneuvrability, able to turn quickly and move with a reasonable top speed (though not as fast as the Annihilator). It holds two people, and is equipped with two high-powered miniguns and rockets. Miniguns on the Buzzard are much more effective than those on the Annihilator - they have a much faster rate of fire, a narrower spread, and are fired both simultaneously, unlike the Annihilator, which only fires one gun at a time. However, they do considerably less damage than the Annihilators guns. They also never overheat, which allows for continuous fire.

The Buzzard's weakness is its bubble canopy and low bullet protection, which can prove dangerous to the pilot and passenger when faced with heavy weapons like the M249 or Explosive Shotgun. Like all helicopters, one of the weak spots is the rear rotor, when destroyed, it will spin out of control. True to its real-life inspirations, the Buzzard is powered by a single turboshaft engine located on the rear section of the vehicle, seen in the circular exhaust on the back, where the tail section starts. Said engine powers the 5-bladed rotor, delivering good engine output to ascend quickly.

The Buzzard handles similarly to how it did in TBoGT; it is still a quick and maneuverable helicopter. The Buzzard Attack Chopper now features missiles which lock on to enemy vehicles and NPCs. Both the miniguns and rockets cannot be used at the same time, unlike in TBoGT. Despite its small size, the buzzard is still a very fast helicopter with a top speed of approximately 135 knots, but will lose altitude when going full speed. The weaponless variant of the Buzzard is functionally the same as the Buzzard Attack Chopper when it comes to performance.

The buzzard's small frame and good maneuverability makes it easier to avoid enemy homing missiles compared to some of its larger cousins, such as the Savage, Annihilator, or Cargobob. However, only one hit from a Homing Launcher, RPG, or any standard explosive will destroy the aircraft. The helicopter can only withstand two to three explosive rounds from Heavy Sniper Mk II before exploding. In addition, the Buzzard's large cockpit windows almost completely expose the pilot to enemy gunfire, and the helicopter itself cannot withstand very much damage before the engines begin to smoke. Just like all helicopters, the Buzzard's engines will begin to fail and give out entirely over the course of approximately two minutes and twenty seconds, assuming no further damage is taken.

A high angle view of the golden Buzzard.
Add a photo to this gallery

A Buzzard Attack Chopper in the original version of GTA V.

A rocket fired from a Buzzard.

A Buzzard attacking gunmen on the Los Santos Naval Port.
Buzzard Wreck GTA V.png
Buzzard wreck in Kortz Center after "The Wrap Up".
Add a photo to this gallery

In multiplayer, there are multiple locations where Buzzards can be found:

Retrieved from "https://gta.fandom.com/wiki/Buzzard_Attack_Chopper?oldid=1178027"
Community content is available under CC-BY-SA unless otherwise noted.